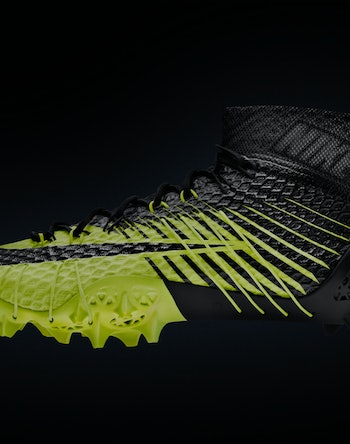 Earlier this month, Nike executive Eric Sprunk sat down at the Geekwire Summit in Seattle and waxed poetic about his company’s plans to produce shoes directly from a 3D printer.

“Oh yeah, that’s not that far away,” he told an enthusiastic crowd that seemed to be sitting in the palm of his hand.

It turns out that Sprunk, although subtle in his delivery, was being honest, because Nike patented 3D shoe printing technology just today.

The weighty patent document, which delves into the meticulous process behind the mechanization and technology used to print an actual shoe, is assigned to Nike Inc. and was apparently filed in September of 2012.

An abstract at the beginning of the document explains how the concept actually works, but the gamut of this glorious little nugget of news lies in this one line, buried beneath volumes of legal and technical jargon:

“Printing may be performed by any number of printers, such as a multi-head inkjet with the multiple printer heads working in tandem.”

That basically means one day in the not too distant future you’ll be able to walk into a Foot Locker, hand over a digital file, and have someone print you a shoe magnificently tailored to the minute divots in your feet. Or, if you’re an unabashed sneakerhead with the time, money, and space to wield a shoe-capable 3D printer, you’ll be able to do it in your home.

Even though we’re still reasonably far away from claiming our first pair of printed 3D Nikes, it’s clear that the future of footwear, at least in this form, is coming fast.