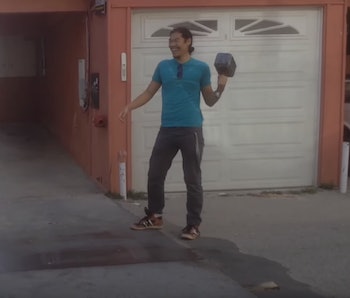 Thor’s hometown of Asgard, at least in the Marvel cinematic universe, is built on the principle (à la Arthur C. Clarke) that sufficiently advanced technology is indistinguishable from magic. But it’s Iron Man you should thank for a real-life version of the hammer known as Mjölnir, programmed only to respond to the touch of its creator.

“One of the earliest trailers for Avengers: Age of Ultron had a great scene where all these superheroes were trying to figure out how Thor’s hammer worked, and Tony Stark comes up with the idea that it must respond to Thor’s fingerprints,” Allen Pan tells Inverse.

Pan took Stark’s theory and ran with it.

Pan, a freelance electrical engineer who runs the aptly-named Sufficiently Advanced YouTube channel, brought some of that mechanical magic dust to Venice Beach, California, hitching a fingerprint scanner to a switch that would kill an electromagnet in the hammer. Just as long as the magnet was stuck to a manhole or other metal surface, it proved (almost) impossible to heft.

“I actually made the hammer back in May, but it was kind of buggy,” he says. “Later I tuned it up and thought it’d be great to find a huge weightlifter on the beach to try to pick it up, but me and my friend couldn’t find any that day so we ended up filming a variety of people trying to lift the hammer.” Now the only thing left is how to make it rocket back to his hand after a bad-guy-crushing hammer throw.

This post has been updated to include comments from Allen Pan.

More like this
Innovation
8.9.2022 11:00 AM
This self-healing material could fix your dinged-up car in 30 minutes
By Molly Glick
Entertainment
9 hours ago
The one incredible Marvel movie you need to watch before She-Hulk
By Dais Johnston
Entertainment
8.13.2022 1:30 PM
She-Hulk’s latest clip may confirm one game-changing World War Hulk leak
By Alex Welch
Related Tags
Share: