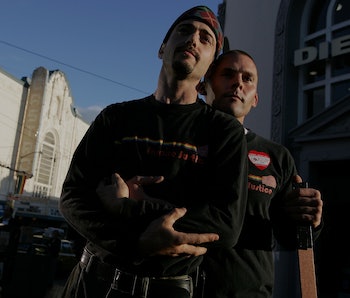 Scientists presenting at the 2015 meeting of the American Society of Genetics announced the discovery of a gene-based algorithm that could predict male homosexuality with 70 percent accuracy. It’s the first time a gene-based model has been used to predict sexual orientation, giving credence to the idea that homosexuality has a biological basis.

Exciting as the claim may be, it’s crucial not to oversimplify the findings.

The scientists from UCLA’s David Geffen School of Medicine discovered that methylation, a form of DNA modification, in certain regions of the genome differed between homosexual and heterosexual identical twin brothers. What they did not find were the elusive “gay genes.” Amid the ever-present “homosexuality is a choice” chants of the anti-gay community, it is, naturally, tempting to claim that this study is concrete proof that sexual orientation is entirely genetic. To say so would be simplistic and, well, wrong. But it does constitute evidence that homosexuality has a biological basis.

The real focus of the study was epigenetics, a field of biology dealing with the ways different genes are turned on and off. Methylation — the process of sticking tiny carbon-and-hydrogen clusters onto DNA — is one way the body regulates this. The only way to ensure any correlations were due to differences in methylation and not genetic makeup was to make sure they were comparing people with the same genes. So the researchers looked at the DNA of 47 sets of identical twins. It should be noted that this is a pretty small study.

The algorithm was able to identify specific methylation patterns in specific areas of the genome that differed, predictably, between the heterosexual and homosexual brother in a set of twins. What it couldn’t tell us is what those methylation patterns mean. Scientists simply don’t know enough about the genes themselves to say whether their activation or deactivation would have a definite impact on human behavior.

What’s really important to bear in mind is that the evidence doesn’t point to a cause-effect relationship. Just because one individual might have the methylation pattern associated with homosexual individuals doesn’t mean he is, necessarily, a homosexual. Ditto for heterosexual patterns. It could be a coincidence. His sexuality and his pattern may simply be correlated.

Commenting on the findings, Dr. Christopher Gregg, Assistant Professor of Neurobiology & Anatomy and Human Genetics at the University of Utah, stressed this point in a public comment at GeneticExperts.org.

It’s a big claim by a small study, so it’s important to take with a grain of salt. Where it’ll be most helpful is in pointing future research on the biological basis of sexual orientation in the right direction. And a lot of future research will be necessary — after all, the findings have neither been peer-reviewed or published nor have they been replicated in an independent population. But it’s a promising start.