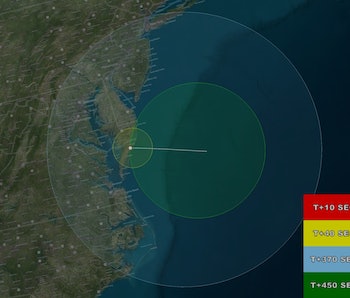 Between 7 p.m. and 9 p.m. on Wednesday, October 2015, Americans in the mid-Atlantic — from Long Island, New York to Morehead, North Carolina — will get the chance to see evidence of a rocket launch.

Launching from NASA’s Wallops Flight Facility in Virginia, the sounding, or research rocket, will scorch into the air on its way into Earth’s orbit.

The big thing you’ll want to look for will be happening about six minutes after launch, at an altitude of about 130 miles. The rocket will deploy four sub-payloads containing barium and strontium mixtures — letting loose a spectacular blue-green and red vapor cloud.

Sounding rockets carry instruments designed for measuring and collecting data and helping facilitate scientific experiments during a suborbital flight. These rockets can usually travel up to about 900 miles in the air, which is usually in between where weather balloons and satellites are stationed.

During this specific flight, NASA will be testing a reformulated Black Brant sounding rocket with a modified motor, launch vehicle, and spacecraft systems, along with a new payload ejection mechanism.

These kinds of flights are important for helping NASA scientists and others run experiments cheaply, keeping launch and maintenance costs low, and saving more expensive rocketry equipment for much bigger missions.

Space junkies can also get a view of the launch through UStream starting at 6 p.m., or keep up with NASA’s Twitter and Facebook pages.