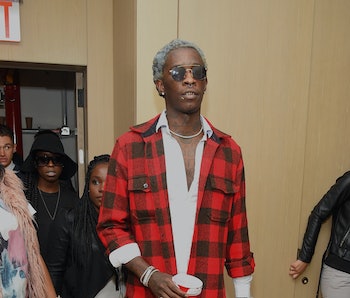 Young Thug is the most interesting rapper in 2015. Yet, quantifying that really feels like dancing about architecture. The visceral draw of Thug’s music that can either make one a diehard fan within seconds or complain this is the worst music in the world is certainly not new. Lil Wayne — one of Thug’s clear predecessors — experienced this backlash and even Future, another Atlanta rapper that’s fought for broader respect from music fans, has seen those familiar insults. Yet Wayne was always a great rapper—listen to this and say otherwise, if one could listen through his drawl. Thug is far more elusive than that.

Thug didn’t used to be such a perplexing force. Back in 2011 and 2012, when he was still writing his I Came From Nothing mixtape series, he sounded like any number of Atlanta swag rappers like Yung LA or J. Futuristic. There were more obvious Lil Wayne influences, but there was a clear pop lane that Thug could potentially fill. By the third installment of the mixtape series I felt fatigued. Songs felt too disjointed, musical stretches rather than fully realized songs. This was not a deal breaker, but it was hard to not see through the Emperor’s clothes with each proceeding release.

Yet Thug could still write a song like “Two Cups Stuffed” that hit the visceral hot button that made him impossible to complete dismiss. But somewhere between signing with Gucci Mane, scoring a hit with “Stoner”, and all of a sudden becoming the go-to rap hook singer, whatever was enjoyable about his music appeared lost. “Hookah” sounded great, but his disjointed albums and mixtapes from Black Portland to the most recent Slime Season offer brief moments of excitement that get drowned out by songs that appear closer to sketches than fully fleshed-out ideas.

In a way, that might be why there is a hard-to-deny appeal of his recent song “Best Friend,” which borrows its hook from a popular viral video from earlier in the year. That kind of light interpolation offers a bit of grounding to Thug, whose music is often so ungrounded that it can be hard to grab onto it, especially when he’s in loose command of the entire track instead of just one of the parts of a track. Yet that free-formed nature is exactly what makes him such an exciting rapper for his fans. At this point, I’ve accepted not enjoying everything he does for the few moments where he finds absolute clarity.

More like this
Innovation
Sep. 21, 2022
Look: Drones could be the future of 3D-printed architecture
By Jennifer Walter
Gaming
4 hours ago
How to unlock the wild Trombone Champ secret ending
By Joseph Yaden
Gaming
Sep. 22, 2022
You need to play the funniest music game ever made ASAP
By Joseph Yaden
Share: