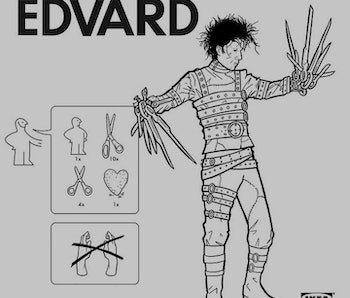 Illustrator Ed Harrington has found a way to combine the terror of building Ikea furniture with characters from classic horror movies. In his “Ikea Series,” he provides how-tos for recreating classic monsters from films like Alien, Friday the 13th, The Ring, and Beetlejuice.

His illustrations provide the same painless, text-free assembly instructions we’ve all come to expect from the Swedish home-engineering giant.

If you’ve ever wondered how to summon Samara Morgan from her well or synthesize a Brundlefly, Harrington’s got you covered. Like his Swedish forebears, he makes assembly seem so easy.

Staying true to Ikea tradition, most of Harrington’s manuals suggest you recruit a friend for help. If you’re putting together a human centipede, you may need to recruit several.