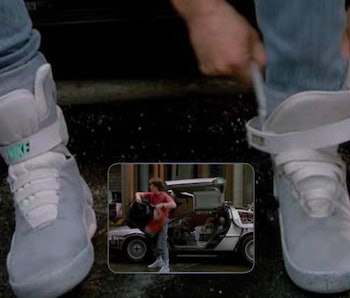 Thursday’s Hollywood prop auction had something for every nerd, but one of the real stars was a pair of Marty McFly’s 2015 Nike Mags. The shoes sold for $84,000.

With the real “Back to the Future Day” coming up, it’s no wonder it was a hot ticket.

The self-lacing formerly futuristic kicks are in “vintage fine condition,” according to Profiles in Hollywood. A fierce bidding war drove up the price — They had been valued at $30,000 to $50,000.

Leonard Nemoy’s Spock tunic from Star Trek: The Original Series sold for $84,000, going for the minimum bid. It was only one of many pieces of Star Trek costumes, props, and paraphernalia that now have happy new owners.

The three-day auction saw close to 2,000 items up for sale. Rocky, Alien, and Jurrasic Park were among the dozens of other franchises represented.

Hollywood: It generates a lot of crap. Some of it will one day be worth a small fortune. Geeks with too much money on their hands can rest assured the prop-auction well will probably never go dry.