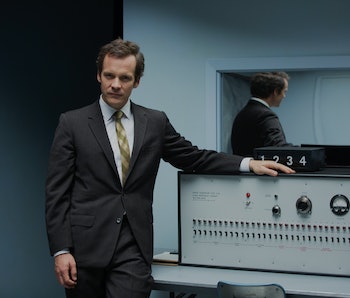 Head to a movie theater and you’ll normally get a group of films about different topics, but every once in awhile movies released around the same time cover similar subject matter. Usually these cinematic twinsies are reserved for big budget spectacles. Armageddon and Deep Impact were both about apocalyptic asteroids, Dante’s Peak and Volcano were both about apocalyptic volcanoes, The Illusionist and The Prestige were about less-than-apocalyptic magicians, and so on. But rarely do you see smaller, independent movies that don’t involve the end of the world tackle topics with such connective tissue. The arrival of director Michael Almereyda’s Experimenter, about the work of social psychologist Stanley Milgram, at this year’s New York Film Festival is a notable exception.

Almereyda’s film spins a biographical tale highlighting Milgram’s infamous obedience experiments conducted at Yale in 1961, which were themselves an influence on Dr. Philip Zimbardo’s equally infamous prison experiments conducted at Stanford in 1971. Zimbardo’s exploits were put onscreen earlier this year with director Kyle Patrick Alvarez’s The Stanford Prison Experiment. Each approach Milgram and Zimbardo’s studies with a keen eye, often using their biopic status to slyly comment on their notoriety by making the audience complicit in the real-life drama. But whether each is seen as an unethical deception by high education hucksters or legitimate psychological breakthroughs, both films take vastly different routes to arrive at the same conclusion.

In his study, Milgram invited a “teacher” and a “learner” separated by a wall and connected by an intercom to test memorizing word pairs while being moderated by an “experimenter.” If the learner answered word pairs incorrectly, they would receive a series of increasingly severe electric shocks administered by the teacher. In reality, the learner was a confederate who was pretending to be a volunteer. The learner would intentionally get word pairs wrong so that the teacher would have to willingly administer shocks while being egged on by the experimenter over the learner’s unseen pleas to stop.

Zimbardo’s experiment enlisted 18 Stanford students to assume the roles of prisoners and prison guards and be monitored 24/7 at a fake prison built in the basement of one of the university’s halls. Given little to no instruction, the guards eventually abused the prisoners; the experiment was canceled after six days.

The experiments themselves were meant to address what would be known as the concept of the banality of evil, notably explored by political theorist Hannah Arendt, and born out of the willingness of Nazis to willingly force millions to their deaths during the Holocaust. Milgram and Zimbardo sought to answer why we continually follow orders or the lead of others even though our convictions may tell us otherwise, or whether we continue destructive behavior if we think the responsibility for our actions lies with someone else.

When we first encountered the trailer for Alvarez’s fictionalized version of Zimbardo’s experiment we said that it was pure entertainment, an example of filmmakers exaggerating science to make something closer to a thriller. The Stanford Prison Experiment is definitely that to an extent, but it skews more towards fact by recreating reality as it happened. The filmmakers back their realism with a vérité-type style, and assembled the script from transcripts from the experiment; Zimbardo was hired as an advisor. Audiences would be forgiven for assuming it was fiction. But it was unsettling in its accuracy.

Experimenter, on the other hand, goes completely surreal. Milgram (played by actor Peter Sarsgaard) and select other cast members address the camera directly, dragging a passive audience into an active role in the experiment. Almereyda also shoots particular scenes against rear-projected backdrops, giving the conversations between characters a performative feel.

At times it’s as if we’re watching a play, or even observing another kind of cinematic experiment altogether. It recalls the deconstructive literary narratives of Nabokov. One recurring theme has Sarsgaard’s Milgram character stroll down hallways followed close behind by an elephant. Perhaps it’s an overt reference to the elephant in the room of Milgram finding his own work suspect, or maybe a simple metaphor for the weight of academia on Milgram’s shoulders. Either way, it’s territory that Experimenter treads that breaks down the simple biopic formula to show a fractured man at the center of his own genius.

Experimenter is science as fiction, most literally when Milgram is seen as an advisor of a fictionalized TV version of his experiment. We never get as meta as that in The Stanford Prison Experiment, which depicts the harsh realities of its psychology at face value. Experimenter seems to keep adding further layers of blurred representation to the story as it goes along as if to say there can be no real answers.

Both disparate narratives suggest both primary experiments that brought each man such notoriety and fame are simultaneously the best and worst things to happen to them. People weren’t ready to accept the psychological truths from each experiment that essentially proved how deep and dark the human spirit can sink. Experimenter and The Stanford Prison Experiment posit that the figureheads behind each are victims of their own ingenuity, and yet the experiments are continually taught in Psych 101 classes. It’s why each can be fictionalized in totally different ways, but be equally prescient. As long as humanity upholds the findings of the experiments, the stories will continue to be told.