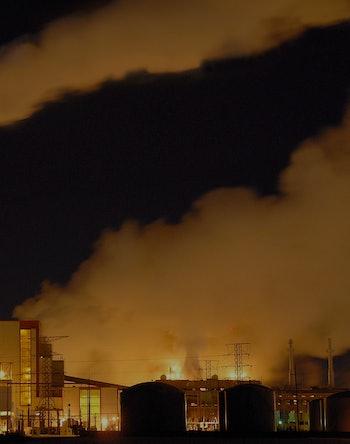 Engineers at Brigham Young University have developed a technology to reduce carbon dioxide pollution from coal power plants to next to nothing.

It’s not the only technology that can do this, but BYU mechanical engineering Professor Larry Baxter says his process is twice as efficient and half as expensive as the competition.

“Some people have referred to this as a game-changing technology, and I think it probably is,” he tells Inverse. “But the game that it really changes is it shows that there is a way to do this carbon capture that is affordable and reasonable.”

In a future where emissions regulations are poised to come down hard on the coal industry, that’s going to make Baxter’s product look very attractive.

“We’re in an ugly contest, and we’re the least ugly of a bunch of pretty ugly candidates. That’s why people are so enthused about this.”

The process works by freezing the gas emissions from coal combustion until the carbon dioxide solidifies into dry ice. From there, it can be easily separated out from the rest of the gases.

In tests, the system has pulled out between 96 and 98 percent of the carbon, Baxter explains in a video:

Besides being cheaper than the competition, the technology also can store energy, making it a great partner for renewables like solar and wind, says Baxter.

It works like this: The carbon-capture system uses a refrigerant to cool the gasses, and generating that refrigerant takes a lot of energy. But the refrigerant can be generated ahead of time and stored. So, if the wind turbines are spinning at night when there’s little demand for power on the grid, that power can be redirected to cooling refrigerant, which is saved up for when power demand is greater.

“This one technology actually combines those two often-competing and sometimes acrimoniously competing sources of power and makes them cooperate in a way that they have a lot of synergistic benefits. It makes both technologies better than they could ever be without it,” says Baxter.

Carbon capture and storage is a hot topic in an era of global warming. The only full-scale coal plant that uses a carbon capture system is located in Saskatchewan, Canada. It uses a chemical wash, rather than freezing, to separate out the CO2.

What happens to recovered carbon? Ironically, almost all of it is shipped to nearby oilfields where it is injected under pressure into the ground to stimulate more oil production.

The rest is stored in deep saline aquifers, a process that is generally considered safe, although it’s hard to say what the unknown longterm impacts might be.

The UN’s Intergovernmental Panel on Climate Change has endorsed carbon capture and storage as a necessary part of the effort to fight global warming.

Baxter agrees that ongoing fossil fuel burning is a necessary part of the world’s energy future. Even as coal burning in the US has declined, it has increased elsewhere in the world, he says. “Globally coal is by far the most rapidly increasing primary energy source.”

Because of that, the US coal industry has a role to play in developing technologies that will make the fuel more sustainable and environmentally friendly around the world, he says.

“The EPA desperately needs the US coal industry in order to find solutions for coal that can be exported around the world. Because their goal of addressing climate change can’t be done unless you can find technology that addresses coal combustion.”