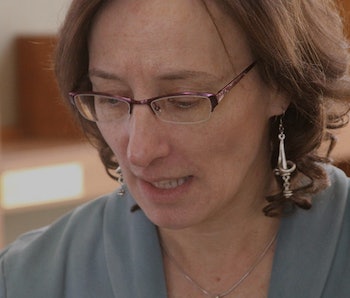 It is 2015, and a woman has just won the Thurber Prize for humor writing for the first time — Julie Schumacher, for her epistolary novel Dear Committee Members. The prize was named for writer, humorist, and cartoonist James Thurber. Past recipients include Jon Stewart, David Sedaris, and Christopher Buckley. Susan Jaffe, the creative director of Thurber House, told The Guardian that criteria for work recognized are that “it cannot be mean-spirited. It needs to be in the Thurber tradition, and Thurber’s humor was very smart and snarky.”

Despite the fact that there have been plenty of humorous books by women — check out NPR’s list, which alas overlooks Lydia Millet’s Mermaids In Paradise — this is the first time a woman has won a prize that has been around since 1996, even though Where’d You Go, Benadette? came out in 2012 with passages like,

“Americans are pushy, obnoxious, neurotic, crass — anything and everything — the full catastrophe as our friend Zorba might say. Canadians are none of that. The way you might fear a cow sitting down in the middle of the street during rush hour, that’s how I fear Canadians. To Canadians, everyone is equal. Joni Mitchell is interchangeable with a secretary at open-mic night. Frank Gehry is no greater than a hack pumping out McMansions on AutoCAD. John Candy is no funnier than Uncle Lou when he gets a couple of beers in him. No wonder the only Canadians anyone’s ever heard of are the ones who have gotten the hell out. Anyone with talent who stayed would be flattened under an avalanche of equality. The thing Canadians don’t understand is that some people are extraordinary and should be treated as such.”

We should note that the the concept that “women can’t be funny!” has been around for even longer than 1996.

Jenny Trout, a writer who often speaks about feminism and pop culture — as in her popular liveblogging of reading 50 Shades of Grey — says the stereotypes about women’s comic abilities also affects what sort of women’s humor men respond to.

“That’s why some of the more successful female comedians we see deal in humor that’s misogynistic or racist; both of those things appeal to different groups of men,” Trout tells me by phone. “‘She’s cute and feminine but she’s doing material about how crazy other women are and she’s not like that? I can relate to her, and I probably want to have sex with her!’ For women who don’t fit that mold, breaking through is harder, because they’re not willing to compromise. If you’re out there to be funny for other women, it’s automatically a political thing, it’s a downer, and men aren’t into that because they’re not the center of attention.”

The Thurber Prize, Trout says, plays to two fields — literature and comedy — in which men have long considered themselves superior to women. “But the truth is,” she says, “men don’t view women as serious talents in any field…I have a grim outlook on this kind of thing. Women are usually seen as being exceptional if they can do something men approve of, and I worry that women who are literary or comedic successes are still seen as outliers.”

Schumacher’s novel satirizes the culture of academia as it introduces its protagonist through a series of recommendation letters — something Schumacher is intimately familiar with, as she herself is an academic at the University of Minnesota. Much like humor site The Toast, which satirizes everything from MFA workshops to Bon Iver, its humor is of the uber-specific funny-because-it’s-true variety, designed to elicit chuckles from anyone who has experienced this particular culture.

It includes lines like, “We argued for weeks about the existence and then the location of a particular semicolon,” or

“I found the project to be a bit quiet (that is, dull), which may have led to the manuscript’s current confabulation—a pseudo-autobiography in which the speaker portrays herself as a fifteen-year-old girl/cheetah amalgam.”

For more from Schumacher, see this video of her reading and answering questions.

Any Thurber winner, by definition, is exceptional. But no mistake, Schumacher is less outlier than indicator that women are perfectly capable of writing the funny.