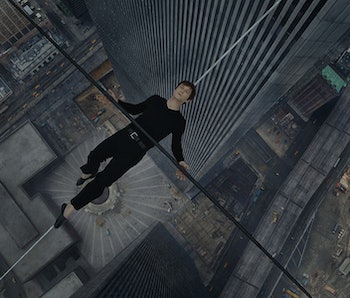 The Walk is a showcase of digital effects surrounded by a disappointing movie. Director Robert Zemeckis’ new 3D extravaganza tells the story of French nutcase/dreamer Philippe Petit, the man who in 1974 trespassed to the top of the Twin Towers and tightrope-walked between them. What kind of man attempts such a stunt? This movie isn’t all that interested in finding out. It joins Zemeckis’ oeuvre as another film that relies on special effects to tell its story. But if that movie exists solely for a single spectacular scene, is it worth it?

For a big-name director, Zemeckis is oddly unsung for his special effects breakthroughs. James Cameron, Peter Jackson, George Lucas — all changed the medium with CGI and digital effects. Zemeckis belongs in that pantheon, having integrated a hand-drawn Roger Rabbit into live-action Hollywood, seamlessly dropped Forrest Gump into historical news reels, and for rendering Beowulf and Grendel with 100 percent digital effects. It’s no surprise that his latest live-action feature would use CGI as its true backdrop, if you’ll pardon the pun.

Whereas Zemeckis’ Flight or Cast Away wove spectacular CGI-tinged scenes into the fabric of a grounded narrative, The Walk lazily meanders to one computer-generated conclusion. What begins as a boilerplate biopic about Petit — played by Joseph Gordon Levitt, wading through a French accent — addressing the camera and narrating his life as he steered toward his defining moment.

The movie surrounding the scene amounts to prolonged foreplay, and a dull foreplay at that. Levitt and his twee enthusiasm grate at the audience throughout Zemeckis and co-screenwriter Christopher Browne’s lackluster script. JGL’s laughably animated performance does everything but beg “Like me! Like me! Like what I’m doing!”

The Walk presupposes that his high-risk circus act is a noble undertaking, and its characters remind you in egregiously overstated dialogue that he’s a capital-A Artist. Characters are constantly selling you this amazing, wonderful, benevolent idea of a dude walking between the biggest skyscrapers in the world but the movie rarely shows you why. It’s a cyclical spiral of idiotic whimsy.

Why should we care? The Walk says he’s doing it for the people, to show them that anything is possible, or, like in one of the movie’s worst lines, that he brought the Twin Towers to life and gave them a soul. This is sophomoric pap masquerading as post-9/11 profundity. Yet they keep talking this way, delaying the high-wire scene and delaying and delaying …

Then: Wow. Petit’s walk, especially in 3D IMAX, is vertigo-inducing. But though he may be walking across a wire 1,300 feet in the air, he doesn’t appear to be in danger — the movie does a lousy job of building tension. Only in an overwrought scene of self-doubt the night before the stunt, no one questions his plan. It’s a cinch for him to talk accomplices into helping; security guards at the World Trade Center are virtually non-existent. This is a caper movie with no cops. Setting up a tightrope between the Twin Towers, it seems, just ain’t that hard.

This could’ve been a spectacular 30- or 45-minute short film. Don’t be suckered in by tales of people leaving theaters with sloshy stomaches. The Walk is a fizzle. It won’t last long in 3D theaters, and it will lose even that punch on 2D home screens.

Thing is, there’s already a fine movie about this moment: The 2008 documentary Man on Wire won an Oscar for its beauty and seamless combination of real-time interviews and archival footage and home movies. A children’s book called The Man Who Walked Between The Towers told the story as well, again with such visual skill that in 2004 it won the Caldecott Medal, the highest honor for illustration in children’s books. Zemeckis’ accomplishments in the rope-walk scene joins this pantheon of spectacle. Too bad the trip up to that ledge is such a drag.