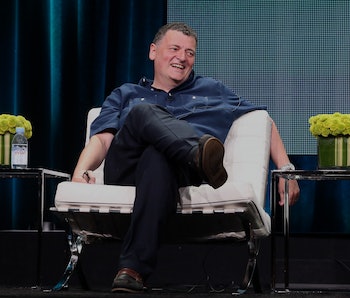 At the end of Doctor Who’s season nine premiere episode, “The Magician’s Apprentice,” we found Missy seemingly dead (again), Clara seemingly dead (again), and our hero, the Doctor, trapped in an impossible situation with his arch-nemesis Davros, stranded on the planet of the Daleks sans TARDIS and sonic screwdriver, where the only conceivable outcome is death (again).

But this is Doctor Who, and if there is one guarantee, it’s that the Doctor always finds a way to win; it’s simply a matter of how he’ll pull it together by the final credits. And sure enough, halfway through the season’s second episode we find neither Missy nor Clara nearly as dead as they seemed, and the Doctor has gone from facing his certain demise to rolling through the Dalek control center, sipping PG Tips out of a porcelain cup in the dying Davros’ tricked-out mini-tank of wheelchair.

And just as you began to ask how in the hell all that happened, the Doctor uttered a line that might be the single greatest act of trolling in the history of the Whoverse:

“Of course the real question is where did I get that cup of tea? Answer: I’m the Doctor. Just accept it.”

In the Russell Davies/Steven Moffat reboot, tongue-in-cheek one-liners have become a staple of the show. But even against that backdrop it’s obvious this gag was show runner and episode author Steven Moffat razzing critics of the current series who point, quite reasonably, to its numerous gaping plot holes and scattershot inconsistencies. In that Whovian equivalent of a Kanye shrug, Moffat is acknowledging that Doctor Who might not stand up to the scrutiny reserved for other shows within the genre, but ultimately, it really doesn’t have to.

Moffat obviously takes pleasure in rubbing some fans the wrong way (sonic sunglasses being a real thing fills me with indescribable rage), but — and heaven help my email and social media accounts for writing this — Moffat, at least in this case, has a point.

Here’s why. When you get right down to it, Doctor Who is a 52-year-old TV series about a fugitive alien (but wait, isn’t his mother half-human?) time-traveler with a binary vascular system and 13 lives (well, somewhere between 13 and infinity lives depending on your interpretation of The Time of the Doctor … plus eight more if you’re a The Brain of Morbius truther) defending all of time and space (well, most of time and space) from his bigger-on-the-inside (trans-dimensional engineering, bro) semi-sentient police box.

Even through the most cursory critical lens, Doctor Who is, and has always been, a hot mess riddled with inconsistencies, overlaps, and plot holes. But oh, what a beautiful mess it has been.

Sci-fi masters like Verne, Asimov, and Roddenberry spoiled us with brands of science-fiction that were heavy on the science. A good part of their work was so scientifically sound, it predicted a slew of technological innovation in the decades that followed. Their acumen conditioned us to expect a pretty high level of not only scientific accuracy, but subsequently tightness and continuity in plots. In short, we want to hold the fiction to many of the standards we apply to science itself.

Those are absolutely reasonable metrics of judging a TV show, but Doctor Who is never going to be that kind of cerebral sci-fi ride. For over a half a century, Doctor Who has straddled the line of semi-credulity and absolute absurdity not through impeccably tight storylines and solid scientific basis, but through witty (though often purposely campy) dialog, over-the-top characters, and emotional interactions designed to elicit a chuckle and maybe tug at the heartstrings every now and again.

Certainly for the new and/or casual Doctor Who fans, these holes and inconsistencies have to be pretty maddening. Hell, for those of us diehard Whovian and/or Whovian-adjacent fans, we side-eyed our way through most the explanations given for the events of the Amy & Rory/River Song storylines. Does it make a lick of sense that the greatest time-traveler in pop culture history can travel anywhere through time and space except Manhattan circa 1938? Nope. But tell me your eyes didn’t get a little bit misty when you realized The Doctor would never see Amy and Rory again, explanation be damned.

I’m not letting Moffat and co. get away with all their misdemeanors. Should we expect Doctor Who writers to at least take reasonable stabs at plausible explanations? Sure. Are there times when Moffat gets a bit too clever for his own good? Certainly. Does it feel like a cop-out to keep falling back on “Because, wibbly-wobbly, and also timey-wimey!” to explain away major story inconsistencies? I mean, c’mon.

But do we necessarily have to buy the explanations of how things happen to enjoy the fact that they are happening? Missy’s cheating death (again) wasn’t terribly plausible, but how could a season of her chasing after the Doctor with an army of Timelord-infused sludgey-pop flavored Daleks not be an absolute blast?

Moffat in his uber-crumedgeony, concern-trolling way is reminding us that Doctor Who is going be to as enjoyable as we let it. Overthinking and over-analyzing won’t stand in the way of the adventure. Just sit back, have a cup of tea, and accept it for what it is.

More like this
Science
8.14.2022 9:00 PM
Ancient lore reveals how warriors manipulated their enemy’s senses in battle
By Adrienne Mayor and The Conversation
Gaming
8.14.2022 3:00 PM
You need to play the most exhilarating free game on Nintendo Switch Online ASAP
By David Grossman
Science
8.13.2022 10:30 AM
The best superhero movie on HBO Max resurrects an ancient warrior myth
By Tara Yarlagadda
Related Tags
Share: