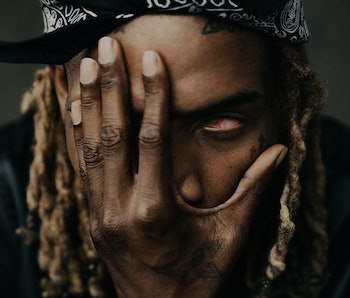 At the beginning of “Time” on New Jersey rapper Fetty Wap’s new album, Fetty Wap, he lays out the entire source material for every song on the album. The whole record, like each song, hinges on just a few distinct melodic snippets. If you wanted to take it to another level of specificity, you could claim that these melodies are each just different embellishments of the main Fetty ad-lib, which — unless I missed something — is on every track of the deluxe edition of Fetty Wap: “Yeee-ee-eeaah, bayb” or “Yeee-ee-eeaah, baybuh.”

“If it’s not broke, don’t fix it” has always been a central directive in popular music, but perhaps particularly so in the formative years of a given genre, when a fundamentally new sound has caught on like an infection. In 1960 Chubby Checker premiered “The Twist” and inaugurated a dance craze, and the following year, with “Let’s Twist Again,” he encouraged everyone, over a similar beat with a slightly more sentimental melody, to keep doing the dance “they did last summer.” The same year, with “Pony Time”, he managed to make a new dance commodity hot: the galloping “pony” dance, and this over a song with a three-chord backing and backbeat deathly similar to “The Twist.” A slew of other dance singles came between and after these. Checker didn’t stop til the very pronounced sound of his instructions-based music was fully in the cultural DNA. His songs were all potent in a similar way: riffs on the same million-dollar idea.

This is exactly the Fetty Wap M.O., and the approach seems to be working in 2015: at a moment when street rap is having a refreshing amount of crossover success. “Trap Queen” was a Top 5 Billboard hit, which went on to be covered prominently and ironically several unfortunate times; subsequently “My Way,” “679,” and “Again” have become major Hot 100 hits. In certain metropolitan areas (NYC’s five boroughs, most pronouncedly) these songs have become part of simply walking outside.

After hearing two or even one Fetty Wap songs, you become able to recognize a new one when you come across it. You will even know basically what to expect from it — if not the basic structure of the hook (they each have at least two), then at least the pleasures the song will hold. You also know that the musical crux of the track will be one satisfying warble — or quick trill, to use the musical term — drawn out slightly longer than other notes, and pliable, like a musical Airhead.

NOTE: The timecode is coordinated to the real album, not to YouTube videos, which may vary. Also, the Deluxe-only tracks have been omitted for the purposes of space and sanity.

By now, we all know the answer to this one. The song seems to start with a hook, one that could go on ad infinitum and swallow up your entire soul in the process. The full weight of the beat, bass, and synths doesn’t come in until Fetty’s melody descends and instigates the drop at 0:55. Then we realize that we haven’t even gotten to the meat of the thing yet. The chorus is lower — weirdly a bit somber. When Fetty hits with the wordless “yeeee-aaah” at 1:00 — the first truly off-the-beat note in the song — “Trap Queen” becomes something more than an ordinary post-Future rap song.

The chorus to the song certainly sticks to you, but it is relatively stock Fetty, and it takes until halfway through the verse for the song to come into its own, with Fetty working his high range and rattling off some credentials: “Started at 22nd, I’m from Haa-arlem.” His voice only trembles and leans in slightly on that initial “Haa-rlem” (“scoo-oring,” “Chris Pau-ul-in,’” etc. will follow) but it’s the moment that locks us in. He plays that melody out to max effect, and beyond.

The original single version is better. Perhaps controversially, I don’t like it when Fetty actually raps in the unapologetically abrasive tones he uses in the intro (“so - damn - fine - tho.”), so it’s arguable that the initial trills of the chorus form the most important moment of the song — at least, they come as a relief. But like any Fetty hook, it’s also worrisome: Too much of this, uninterrupted, could be disastrous. But as in “Trap Queen,” the problem is alleviated when Fetty twists the basic “Yeee-ah, bayb” melody to launch the chorus’ second half: “And I got this so-oowed up.”

The chorus of “Jugg” is the “Let’s Twist Again” to the “My Way” chorus’ “The Twist”: a twitchier retake on its melody. The song kind of vacillates in familiar, undirected ZooWap territory until he hits the triumphant “Baby girl, is you gon’ JUUUG with me baby?” He doesn’t waver on the note, so it’s not really a warble. But what the fairly rote “Juug” needed to succeed is a broken rule.

“Trap Luv” opens with chunky, clipped synths that harken back to “Trap Queen,” and a minute of pretty clunky rapping before Fetty gets back to flipping his ol’ reliable “Yeee-eah baby” melody. This doesn’t excite much until it rubs up against the guttural synth stabs at the song’s very center: “I might go cop me a Raaaa-ri, babe.”

This is the first track that feels like filler. But the Major Trill is definitely essential: the exuberant “Yeeee-ah” mixed with the short, jittery rhythms of the short bridge section offers some much needed variation (“Juuggin’ and I’m finessin’, yaaay-ee-ee-eah”). Fetty always redeems himself, at least to some extent.

With its smooth, Bad-Boy-like romance groove and perfect construction, the album’s fourth single has got to be one of its best songs. It is from the very outset. When Fetty says “driii-vin yooo-oou crazy,” he’s talking about the detrimental effects of his partying on his girl; yet the high, lilting melody also feels like an evocation of the shared sexual ecstasy that keeps them coming back to one another. Sue me.

This song is basically one big trill, so let’s call the most crucial moment 0:19. Fetty milks that little serpentine lick for three-and-a-half minutes, coupled with some of his most heartfelt and memorable lyrics, and calls it a day.

The best intro on the album — as I alluded to at the beginning of this thing. It’s basically Fetty howling at the moon. Structurally, though, the lynchpin of the song comes later, with a classic, sultry “juug” line where Fetty hits the lower range that makes the “Trap Queen” chorus, and interrupts his hypnotic rhythm for a minute.

Who are you trying to fool by rapping this whole thing, Fetty? The song illustrates the debt Fetty owes to Chicago drill music, particularly the work on Chief Keef of the past year and a half, down to the articulation and clipped, vociferous ad-libs. There’s also a “Free my nigga Guwop” shoutout (Gucci Mane has been in jail the entire time that Fetty has a cultural presence). No one’s impressed here. Give me some goddamn vibrato!

This is tough, because this one — more than any other Fetty song — just sticks to one main, warbly melodic shard. But sometimes too many trills is the same as no trills at all. Fetty gives the song definition when he finally transitions out of the hook’s melodic pattern with the languid, picturesque “Causing pure hee-ll, wildin’ ou-ut on this island.”

“Let me take you ouuutt/Would you like it if I kissed you no-oow?” It’s the major come-on of the song, and being that it’s sweet, humble, and romantic, he coos it appropriately.

This is a long ballad that I can’t imagine anyone ever wishing for from Fetty. It has a conventional Fetty chorus based on one phrase, and the lower-pitched, down-to-earth verse is the better section. When he switches up the flow in the second half of the verse (a frequent move), we snap back to attention for a moment: “Baby girl, I got a plan, you be my boo thing, yeee-aah…ay.”

After the initial sunny chorus, Fetty lets loose a weird glottal sound he’s never tried before. It’s kind of like a classic Wap trill, but if he was choking on a piece of broccoli while doing it (“It’s ZooVier and they gonna know my damn naa-aame”). Something new — even when this small — is important in Fetty Wap songs.

The key here is the direct recycling of the “My Way” riff, which crops up at 0:24. Whatever, he pulls it off. This song is one of the album’s better mellow moments. Fetty’s ability to make this work — build successful songs that collage bits of pre-existing ones — is a testament to the power of his sound.

However, 2:22’s turn on “Benjamin Fraaa-anklins” is probably the most memorable musical moment of the song, if not the most structurally important.

What? Why isn’t this song featuring Monty? Something must be wrong. This song, propelled by one of the album’s best beats, is (if you can believe it) another riff on the “My Way” trill, which is only an outgrowth of the “Yeee-aaah, bayb” adlib after all. The “Yeee-aah, bayb” is harmonized in a resourceful way here. Nothing matters, though, by this point. So much of this has been thrown at us at this point — we’re floating in Fetty Wap nirvana. Everything but the cosmic warble is beside the point.

Thank God, Monty’s back! The album’s most pronounced and committed ballad. Unfortunately, also its longest song. By this point, most will be begging to be pulled out of the ZooWap isolation chamber, I need some air. But Fetty’s most seductive, wavering melody comes here — he’s saved the slickest moves for last: “Cause we be all niiii-iiight, baby.” In general, this song is a term paper on how to sexualize a trill. It’s a nice final gesture, perfect for after the kids have fallen asleep.

And there you have it: the Wap, unlocked. Fetty Wap in stores now.

More like this
Mind and Body
6.29.2022 6:30 PM
How music makes you feel may depend less on your brain than scientists once thought — study
By Allison Parshall
Entertainment
17 hours ago
Marvel finally comments on the wildest Thanos theory from Avengers: Endgame
By Corey Plante
Entertainment
13 hours ago
Stranger Things Season 5: How the Season 4 finale sets up the darkest chapter yet
By Dais Johnston
Share: