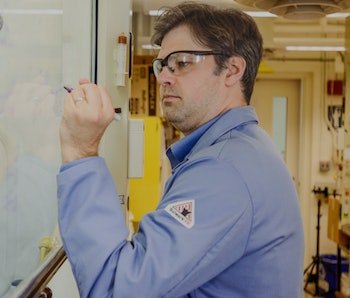 The 2015 MacArthur Fellowships were announced on Monday, which is why Cornell University chemist William Dichtel is already having a damn good week. He was awarded a $625,000 no-strings grant as recognition for his innovative work building synthetic and supramolecular materials. The award couldn’t be more prestigious, but still might not adequately reflect the importance and applicability of Dichtel’s research.

Dichtel and the rest of his lab’s research is specifically centered around designing porous polymers called covalent organic frameworks (COFs), which are made by stringing together molecules into a large, extended structure capable of trapping and collecting certain substances and chemicals while letting others move through freely. These materials “have incredibly high surface areas,” says Dichtel. They could be large enough to cover up a football field, yet weigh as much as a single dollar bill. The big surface area creates a high degree of interactivity between the material and other substances.

Dichtel and his colleagues are interested in creating a whole new suite of devices ranging from water purifiers to hyper-efficient batteries to bomb detectors using the technology, which is a sort of a killer app for everything.

“What is unique is that you can really control the structure, size, and shape of these tiny holes,” says Dichtel. “That’s not easily done with other kinds of materials.”

Dichtel isn’t yet sure how he will be using the MacArthur grant money as his research moves forward. “The news is still pretty new,” he says. But he is considering pouring some of his winnings into his work. “Most of the funding we pursue is through the federal government,” he says, adding that government money comes with lots of regulations. “Having this money, with no strings attached, really allows us to pursue more audacious ideas.”

And, yes, Dichtel is a gracious winner. He credits “a huge team of very talented people: graduates, undergraduates, post-docs.” He uses words like “we” and “they” as in: “It’s amazing to see their work gain recognition, especially when good work in science is not always recognized in its own time.”