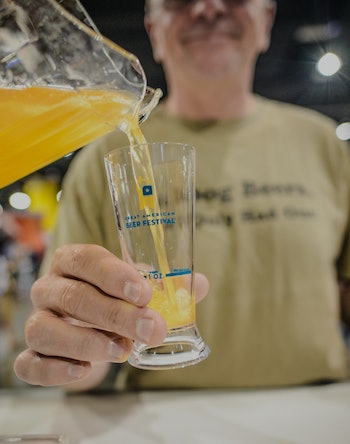 The Great American Beer Festival took over Denver this past weekend with 750 breweries in the Colorado Convention Center serving 3,800 beers (there were 6,647 beer entries from 1,552 breweries for the competition medals). Because of its sheer size, it’d be ludicrous to claim that you surveyed the whole fest — even if you logged full shifts at each of the four sessions. Nevertheless, I gave it a shot, and after a couple of Tylenol I bring you this wrap-up born of hazy iPhone notes. I don’t claim to have seen — or tasted — it all, but chances are you’ll want to try a few new brews.

The cornerstones of the region were still bringing it: Great Lakes served enough delicious, coveted Christmas Ale to run out by Saturday — they always do. And the Buckeye State locations of Fat Head’s took home four GABF medals. (Including a gold for Hop JuJu Imperial IPA, which is as floral as spring in Paris, yo.)

Smaller Ohio breweries shined, too. Hoppin’ Frog repped over-the-top flavors, while Willoughby Brewing Company poured a Peanut Butter Cup Coffee Porter that was like boozy Reese’s in a glass. Rhinegeist showcased an ultra-smooth imperial IPA, Saber Tooth Tiger, which also had the bite its moniker foretold. At JAFB on Friday, I was blown away by a trio of its IPAs. When I found out on Saturday that its Rain Delay IPA had won a silver medal, I decided on a new category for this article: Why I should be a judge at GABF.

Goddamn it, we get it already: California

Ugh, California. So big. So good at so much. Couldn’t you guys have just stuck to wine? Clearly not: Checking out the list of medal winners from this year, you’ll notice a lot of CAs. And, dammit, they deserve it. Central Coast’s Monterey St. Pale Ale is super-balanced and drinkable, with great hop flavor. It also happened to win gold in the ultra-competitive American-Style Pale Ale category: proof that Great American Beer Festival judges can get it right.

It can be easy to overlook the bigger brewers, many of whom command impressive end booths at the fest. But, guess what? Many of them are larger than the others for a reason. Bell’s brought the thunder on a fantastic Octoberfest (not sure why they spell it that way), Brooklyn busted out a tart, robust K Is For Kriek — which is hard to find even at the brewery — and Southern Tier still might have the best pumpkin beer in the land with its Pumpking. Oh, and Coors Banquet won the American-Style Lager or Light Lager category. That’s right, suckers. Centennial State for the gold.

Give it up, already: Pretzel necklaces

Pretzel necklaces make you look like an ass. Stop wearing them.

Straight outta Queens! Finback had a hella solid IPA pouring at GABF; here’s to them making a go in a borough thirsty for good beer.

Nerd alert: In a speech, Eric Wallace — co-founder of Left Hand — touched on a lot of beer geek touchstones, like using proper glassware. One bit in particular struck me: brewers pushing bars to clean their lines more often. You see, a lot of bars and restaurants don’t clean those tubes that connect to the kegs often enough and it can lead to skunky and downright crappy beer. Choose where you drink your brews wisely, people. First-world problem rant, out.

Not only did he rock the freshest nametag at GABF, he warned me of broken glass in the area. Thank you, Turd. Thank you.

I’d heard about this Massachusetts brewery before, but hadn’t tasted its concoctions till this weekend. Boy, are they stellar. And they’re all lagers. That’s right: The brewery solely focuses on beers that are too often cast aside as not serious enough. Jack’s just opened a new facility, which means its complex lagers — like the peppy Hoponius Union India pale lager — should be headed to you sooner than later.

It’s almost impossible to get these Michigan suds outside of the Midwest, so it’s always a pleasure to taste what they’ve got cooking. When Short’s says they’ve got a key lime pie beer or a gin and tonic beer, that’s what it’s gonna taste like. Wizards, they are.

Best overheard line: “I think the mustache wax industry can survive because of this weekend.”

As I was walking down an aisle to the north side of the fest, I heard a woman say this to her pal. I laughed pretty hard and, from that point forward, kept my eyes out for hipsters with greasy ‘staches. There were a lot. I look forward to this trend’s inevitable wane.

Surefire way to make an ass out of yourself: The silent disco

Bart Watson, staff economist at the Brewers Association, gave a killer presentation on Friday with some mind-blowing numbers. As of this moment, there are 4,011 U.S. breweries. (Well, probably 4,017 by now.) That number is approaching the historical high from — get this — 1873. That year, before prohibition took joy out of everyone’s lives, there were 4,131 breweries. Watson believes we will eclipse that number by the end of this year, or early into 2016.

He also highlighted that the Brewers Association believes craft beer will have a 20 percent market share by 2020. It was 11 percent last year, so it’ll be interesting to see if the beer bubble bursts in the next few years. People inside the industry sure don’t think it will.

A few years ago, aggressively-hopped double or triple IPAs were all the rage. Then, we got a slew of session IPAs and sour beers. Now, gose lowers the boom. It is, technically, a sour, but it’s specifically a German style. The type is not exactly my personal fave, but they’re worth a try. Get ‘em while they’re hot.

Hometown heroes and Soviet sympathizers Comrade Brewing Company took home a silver for its Fresh Hop Superpower IPA. Its other beers are just as strong. J. Wakefield, from Miami, was founded by a dude with experience at the venerable Cigar City. Its El Jefe exploded with coconut flavor. Rahr & Sons, out of Fort Worth, kicked my ass with the Regulator, a doppelbock with an amber hue that bursts with front-of-the-mouth flavor. And Alexandria, Virginia’s Port City straight-up won Small Brewing Company of the year. Their beer rules. Don’t be surprised to hear these names more often in the coming years — especially if you’re hanging out with dudes who use a lot of mustache wax.