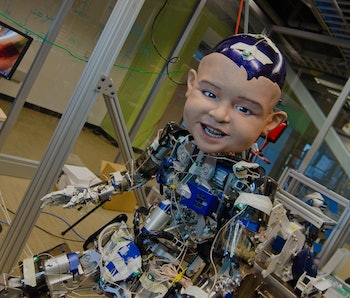 A new study finds that babies are much smarter than we think.

Published in PLOS ONE, the article “Infants Time Their Smiles to Make Their Moms Smile” explores the mother-infant relationship, and how babies as young as four months play mind games with their parents.

Researchers Paul Ruvolo, Daniel Messinger, and Javier Movellan needed a control to compare with the normal interactions of mothers and their children, so they decided to get a hyperreal robo-baby named Diego-San. Unlike with real babies, they could control how Diego-San interacted with participants to see if they behaved as predicted.

Diego-San could smile as the real infants had in previous experiments, reflect the stand-in mother’s smile back at her, or just generate a smile based on an algorithm for likely smiles. He also had a fourth, more interactive, smile function called “Infant Plus”:

“Diego-San was more likely to modulate his expression to be the same as the participant (elevated probability of matching of 50 percent per second). This controller was designed to test the effect on the participants of increasing the contingency of the robot’s smiling to the participants’ smiling.”

The researchers found that moms tried to smile simultaneously with their kids as long as possible. The babies, though, timed their smiles to keep just their moms smiling longest. That is, they figured out that they could make their moms smile more without having to do it as much themselves.

Ruvolo, Messinger, and Movellan believe Diego-San could be used to study behavior of developmentally challenged children. It’s also interesting evidence that babies are more aware than they may seem.

But also, it’s a scary fuckin’ robot: That baby face looks super aged, like it’s seen some real dark stuff. Coupled with the body, it’s a mini-Terminator. More importantly, it shows the potential of robots in sociological, psychological, or biological studies. Using such realistic simulations allows for more authentic results when trying to study such previously nebulous and unquantifiable human interactions.

More like this
Science
6.16.2022 11:00 AM
NASA CAPSTONE launch plans and more: Understand the world through 7 images
By Robin Bea
Science
6.18.2022 10:00 AM
Can you upload your brain to a computer? A neuroscientist explains the crushing reality
By Guillaume Thierry and The Conversation
Science
6.24.2022 1:30 PM
The best post-apocalypse movie of the century reveals a dark debate over humanity’s future
By Tara Yarlagadda
Related Tags
Share: