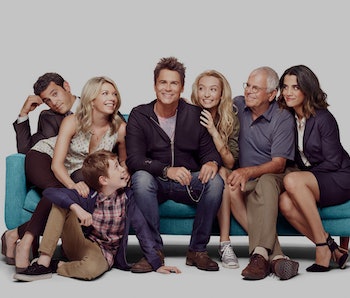 Last night, I watched the pilot of FOX’s new sitcom The Grinder, which premieres this coming Tuesday. Yeah, I know, but I did, and I have a few thoughts on the subject.

Here’s the premise, very simply: Dean Sanderson, Jr., played by Rob Lowe, is the star of a successful but recently discontinued prime-time courtroom drama, who decides he wants to be a real lawyer like his little brother Stewart (Fred Savage). Dean invites himself to live in Stewart’s house in Idaho (?), starts showing up in the courtroom, and spontaneously taking over Stewart’s cases, to the delight of all except Stewart, who tells Dean to leave. Eventually, Stewart has a change of heart: Everyone loved Dean the fake lawyer, and Dean is legitimately helping Stewart win cases. Dean stays, and we have the premise for the rest of the TV show The Grinder. It’s one of those pilots where you can very clearly see what you’re going to be getting yourself into from the jump.

I feel like I am failing as a critic today: I literally cannot tell you if I liked or disliked The Grinder. The terms don’t feel relevant.

In a certain way, the show’s production quality, nuclear family-based setup, hokey scripting and complete lack of dynamics reads like pretty much anything you’d expect from this type of programming. For those who don’t regularly watch new primetime sitcoms (this is me, as well), one might think, “Wow, is this what TV is like?” Many ninnies would be shocked, dwelling in their walled-in worlds of prestige programming and pulpy shows that have been designated as hip or noteworthy, debating the meaning of Mad Men’s Coca-Cola ad and mansplaining the appeal of Empire over $8 IPA drafts. Outside that little nexus, different things like “The Grinder” are pumping into homes across the country. Many zone out and accept them without really addressing what they think or feel about them — what value system or concept of the world this station-padding is either reifying or affirming in the back of their minds. For many, no doubt, shows like The Grinder are a legitimate comfort. What scenes you might conjure when thinking of the imagined Rest of the World watching The Grinder.

Careful, or you might miss the ways The Grinder is resonating with you. There is a vaguely improvisational quality to The Grinder which seems fresh — some disruptive moments of absurdity, plenty of weird meta-humor, and a bigger-than-life, Lower-than-Lowe performance that frequently made my jaw drop. Lowe delivers everything with the same high-key but deadpan energy, with a strange mouth tic he’s developed in his later career; in his Shopping Channel-ready automatonism, he’s strangely compelling.

One longs to just be watching Lowe, and not Savage, whose Romano-meets-Bateman, voice-of-reason straight man character is just tedious, and a vehicle for bad jokes. He doesn’t provide a funny foil for Lowe; Lowe just overshadows him at every turn. That is part of the point, narratively, but this doesn’t make Savage’s hammy, would-be “relatable” performance any more bearable (see: his unfunny idea of what being a “bad lawyer” looks like). If you analyze Savage’s approach to acting too much, it might make Kevin Arnold, in hindsight, lose his charm.

But is this inviting, Lowe-driven absurdity not just another instantiation of that sub-Arrested Development, weirdly paced and semi-off-the-cuff style of TV comedy which has become a norm in programming of the past few years? Every new comedy, in one way or another — from The Mindy Project to Brooklyn Nine-Nine to even the flamboyant Broad City — draws from this same well. Probably, as far as this sort of thing goes, The Grinder represents the absolute pits of the genre. Forget its Forgetting Sarah Marshall associations: Two of this episode’s writers worked on this show, and the other one wrote Sex Tape. Who am I fooling by maybe liking The Grinder?

Perhaps I was just struck by the effortless oddness of Lowe, which outsizes this show’s feeble framework. Was I intoxicated by imagining that this is the exact way he is in real life? What am I, when I watch The Grinder? Do I want to watch more, or forget that I ever stared down this path? Should you watch the pilot on Tuesday? Absolutely, if only because Lowe always says “Grinder rests” at the end of every trial. Figure this one out for yourself.

More like this
Innovation
7 hours ago
This is how scientists will predict the next massive hurricane
By Abe Musselman
Innovation
Oct. 5, 2022
Worm spit could be a secret cure to the world's plastic problem
By Molly Glick
Innovation
Oct. 2, 2022
Want a better relationship with your dog? Neuroscientists say these 7 factors are key
By Tara Yarlagadda
Share: