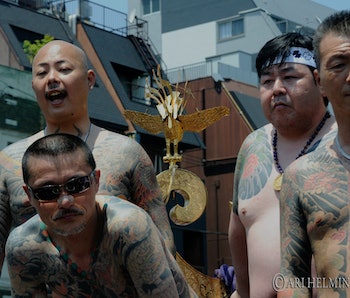 Sunday Lectures is a weekly roundup of the internet’s most interesting educational videos. Get smarter without getting out of bed.

Are there any jobs a robot can’t do? From driving cars at Uber to running the deep fryer at McDonald’s, there seems to be no end to their potential. Sure, they might spell disaster for human laborers, says Rise of the Robots author Martin Ford, but they could also buy us the time we need to finally relax.

Japan’s Yakuza: Inside The Syndicate

After 10 months of wrangling, Belgian photographer Anton Kusters scored a pass into Japan’s international crime syndicate, the Yakuza. Following one Tokyo-based family, he proceeded to photograph the underworld bosses and their henchmen for the next two years.

The Science Behind Hollywood Explosions

Disaster artists like the University of California-Santa Barbara’s Theodore Kim know the secret to creating a convincing movie explosion: It’s all in the smoke. Here, he discusses an algorithm for Michael Bay-level smoke simulation.

Make one small social faux-pas on Twitter and you’re bound to get called out. Sometimes, if you’re a particularly prominent Tweeter, you get shamed by the masses. Being one of those unlucky few, journalist and Men Who Stare At Goats author Jon Ronson can’t help but wonder what the rise of public shaming says about us — and whether it’ll ever go away.

“Economic bias” is jargon for “conflict of interest involving money” For example, the kid I’m giving piano lessons to can’t read notes to save her life, but it’s all good because her mom pays me by the hour. These biases, which violate economic rationality, affect the choices we make every day, as Yale University psychologist Laurie Santos explains.