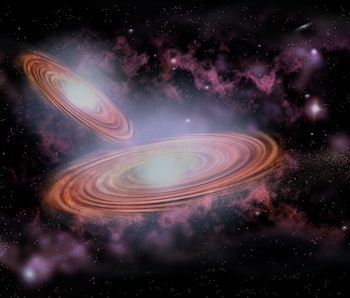 Three and a half billion light years away, deep in the Virgo constellation, two supermassive black holes are on a collision course.

Unfortunately for science, the crash isn’t expected for 100,000 years. That may seem like a long time, but in galactic time it’s nothing — just a couple of light-weeks and much sooner than expected.

When they converge, the two black holes will merge as one. Their horizons “will touch each other and start to distort each other very greatly and then whip around and ring like a bell, almost, and settle down into another black hole,” Columbia University astronomer and PhD student Daniel D’Orazio tells Inverse. He’s the lead author of the new study predicting the crash.

The merging event itself will be over in a matter of hours, said D’Orazio — about as long as it takes for light to travel the diameter of the newly formed super black hole.

The enormous explosive energy will create gravitational waves, which are actual ripples in the space-time continuum.

That’s the theory, at least. Albert Einstein predicted the existence of gravitational waves as part of his theory of general relativity in 1916. A century later, astronomers are getting closer to actually measuring them.

The trick is to find a source of gravitational waves strong enough and close enough to Earth that they can be detected. A collision of supermassive black holes should produce stronger ripples than other known events, and so astronomers are putting a lot of effort into looking for them.

This is not a particularly rare event. There are billions of galaxies in the observable universe, each with a black hole at its center, and astrophysicists suspect they merge with other galaxies a few times in their lifespan. The trouble is finding a merger close enough to Earth for our relatively limited technology to witness.

Earlier this year a group of scientists at the California Institute of Technology pointed to quasar PG 1302−102 as a candidate for a system with two black holes very close to each other.

A quasar is a type of galaxy where the black hole at its center is so large and so active that the light emitted as stars are ripped apart and fall into it, and it outshines all the other stars in the galaxy.

The Columbia team’s new research puts more weight on the hypothesis that quasar PG 1302−102 has two interacting black holes at its center.

Earth’s best telescopes are too weak to directly see if the quasar has one or two centers, Zoltan Haiman, D’Ozario’s PhD supervisor, tells Inverse. (Haiman, D’Ozario, and another scientist, David Schiminovich, co-authored the study.) But the previous research noticed that the light emitted by the quasar fluctuated in a regular way, becoming a tiny bit brighter on a five-year cycle. They hypothesized that this could be due to the interaction of two black hole systems spiralling around each other as they come together.

But the earlier paper didn’t explain why a binary black hole system would flicker in this way, or rule out other explanations, says Haiman. “It was sort of ambiguous.” The Columbia team hypothesized that the system around the smaller of the black holes would appear brighter as it approached Earth’s line of sight. They analyzed UV radiation to prove the theory.

Unfortunately, this particular black hole collision is not happening soon enough or close enough for Earth’s astronomers to detect its gravitational waves. But D’Orazio, for one, says it’s likely that astronomers will directly detect the space-time ripples within his lifetime.

The CalTech team has already identified about 100 other quasars that are likely candidates for this sort of binary black hole system, and the Columbia astronomers are conducting their own search, too. When and if they find gravitational waves strong enough to detect from here, it will answer fundamental questions about galaxies, black holes, and the nature of gravity itself.

Of course, the light we detect from quasar PG 1302−102 today is 3.5 billion years old. So you could say, in a way, that the black hole merger took place long ago. But we shouldn’t get too hung up on this, said D’Orazio. According to Einstein’s theory, time is relative. As a result, “there’s no real, good definition of ‘now,’” says D’Orazio. The only “now” we have is the one we can observe from Earth, he says. “The hard thing is that we can’t instantly go there. What really matters is our observation of it.”

This idea that time is not a straight line can be a little hard to wrap your head around. And that’s how all of the smartest astrophysicists can spend all of their collective lifetimes working on these problems and still come up with more questions than answers. Godspeed, space nerds, godspeed.