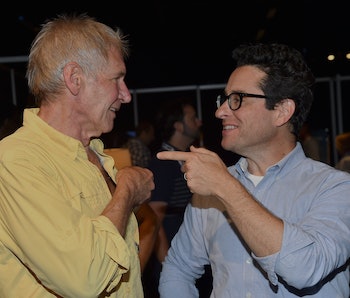 J.J. Abrams’ illustrious career began precociously. While still a college senior at Sarah Lawrence he sold a script for Taking Care of Business, the 1990 comedy starring John Belushi as an ex-con who assumes the life of a prominent business person. Not the most obvious of starts for the guy now directing the biggest franchise in the world, but it got him moving early, but since breaking into the industry, he’s taken a decidedly genre-focused approach, involving himself in many different roles for TV shows and films like Felicity, Armageddon, Cloverfield, Alias, Lost, and more.

As a director, though, his portfolio of sequels, reboots, and pastiches has led up to the one thing on the horizon: Star Wars: The Force Awakens. It’s as if, for the past 25 years, Abrams knew one day he would be getting the keys to the temple, and has been preparing himself for it all along.

Lost was key, if only for making him the darling of fanboys. He had built an expansive mythology from the ground up, and ushered in an era when long form serialized television favored a bigger cinematic approach. The ensemble experience helped him land his feature-film directing debut, Mission: Impossible III, a troubled production that had seen the departure of Directors David Fincher and Joe Carnahan. Abrams stepped in because Tom Cruise admired Abrams’ previous work. The director told MTV in 2006, of the Mission: Impossible gig: “In many ways it helped inspire Alias, which I think is why I got the job. Tom had become a fan of that series.”

Though the movie ended up grossing the least of the M:I films, Abrams had shown long-term promise; he continues to co-produce the M:I movies. By wrangling a franchise in progress and yet leaving his own stamp, he set himself up for his next huge leap.

Star Trek: Nemesis had all but killed the beloved Trek franchise in 2002 despite featuring a fresh-faced Tom Hardy at the beginning of his career as the main villain. But by 2009, a renewed interest in rebooting the feature-length voyages of the Starship Enterprise got Abrams and his production company Bad Robot involved. By his own admission, he let his preference for the other geek-friendly series with “Star” in the title lead the way. He told PBS in 2013, “As someone who has become a late in life Trekkie, I really think there’s room for both these things. It’s funny because Star Trek in some ways informs Star Wars. We did Star Trek…my love of Star Wars, the energy of it and sort of the comedy and rhythm of it I think affected Star Trek.”

The similarities were pervasive. From the visual style to favoring an action/adventure plot over the traditionally more measured Star Trek storylines, Abrams’ Star Trek was an obvious Star Wars dry run even when another Star Wars movie was pure conjecture. Outlets like IGN devoted entire posts listing the parallels, while those like Christopher Rosen in the Observer came right out and said it. “Mr. Abrams’ perfect summer confection is literally the movie Star Wars fans had hoped The Phantom Menace would be,” he wrote. “There’s Kirk-as-Han Solo; Young Spock-as-Luke Skywalker; Future Spock-as-Obi-Wan; Scotty-as-Chewy; Uhura-as-Leia; Bones and Chekov-as-C3PO and R2D2.”

The same critique would be lobbed at the much-maligned follow-up, Star Trek Into Darkness, but by its May 2015 release, Abrams had already signed up for Episode VII.

The outlier of the bunch is Abrams’ 2011 film Super 8, which was sandwiched between his two Star Trek films. It’s the only original story Abrams has directed as a feature film, but in this case originality went only so far. The film, about a group of kids who discover an alien on the loose in their small Ohio town, so closely aped the style of Steven Spielberg’s films of the ‘70s and ‘80s it might as well have thanked Close Encounters of the Third Kind and E.T. in the credits. Spielberg even produced the thing under his Amblin Entertainment banner, the nostalgic beacon of his films of that era. The most important thing about Spielberg, other than his own indelible filmography, is his relation to former Star Wars mastermind, George Lucas.

Though Super 8 was a financial success, it’s been mostly forgotten by all but Spielberg completists. You can make the case that it proved Abrams could pull off subtle character moments in the middle of his sci-fi spectacles, but it almost makes more sense to view it, in part, as an exercise by Spielberg to vet Abrams. Spielberg, after all, is a close confidant of Kathleen Kennedy, now the president of Lucasfilm and previously the producer on most of Spielberg’s biggest hits. Spielberg was like the surrogate Lucas, helping to pass the torch to Abrams.

All of his efforts in the director’s chair brought him to this conclusion. J.J. Abrams has been waiting his whole life to direct Star Wars; his other swings at beloved franchises have been long-game prep. Though he was originally reluctant to take on the task, he was lured, almost by an unseen force, to be where he is today. He may not be directing Episode VIII, but his effect will be inevitably felt long after he’s moved on to other franchises.