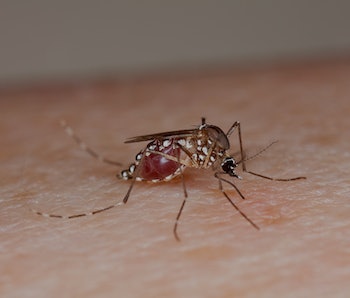 We can add the world’s most hated insect to the list of organisms that will benefit from climate change, according to new research.

Researchers from Dartmouth found that mosquito larva could be 50 percent more likely to survive to maturity in Arctic regions if temperatures rise by two degrees Celsius. And the Arctic, of course, is warming faster than anywhere else on the planet.

They’re not just a pain for human residents of the North. The study suggests that increased mosquito populations could have severe consequences for caribou herds.

“Insect harassment drives caribou movement, often to insect-free areas such as snow patches and wind-exposed sites at high elevations that offer less food,” the authors write. This can lower chances of survival, especially for young calves.

And not only will there be more mosquitoes, but they will also tend to come out earlier in warmer springs, according to the research. That will increase the likelihood that the emergence of mosquitos overlaps with the caribou calving season, when the pregnant animals congregate, and all give birth together, making an easy target.

“I have heard that mosquitoes can take enough blood from a calf to kill it. I have never seen this happen, fortunately. I’m not sure how big of a swarm but you can be covered in hundreds of mosquitoes after just a few minutes of standing outside during mosquito season.”

Of course, things that eat mosquitoes stand to gain from an increase in food population. Many species of bird rely on the insect as a food source, Culler says. Some plants may benefit, too, since mosquitoes are pollinators.

Whether climate change will increase mosquito populations in other parts of the world is still uncertain, says Culler.

“It’s likely that warming anywhere would cause mosquitoes to emerge as adults in fewer days but we have to consider that along with other factors such as the number of predators and how those predators respond to warming.”