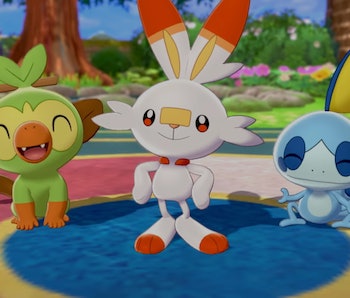 In Pokémon, choosing the best starter often feels like your first tough decision of the game. This is your first Pokémon, one that might go on to be your best Pokémon or your best Pokémon friend. If you choose incorrectly here, it’s a choice that’ll haunt you for the rest of your life( or until you unlock breeding and can trade for the one you wanted). But how can one choose between the Pokémon Sword and Shield starters?

For many, the choice of starter is based on appearance— which one strikes the biggest chord in cuteness, coolness or relatability. That’s a fine metric to go by, the starter Pokémon chosen won’t affect overall difficultly, but rather when the game spikes in difficulty.

For the first time since the Johto region, every Generation VIII starter remains their base type all the way through— there’s no branching off into Fire/ Fighting or anything else in later evolutions. Grookey will forever be a grass-type, Scorbunny will be a fire-type, and Soblle will remain a water-type.

Keeping that in mind, the initial ‘most useful’ Pokémon is a toss-up between Scorbunny and Grookey. Scorbunny’s fire moves provide extra damage against the first gym leader, Milo, who uses grass-type Pokémon. Scorbunny on hand makes the challenge into a breeze. However, they’ll be weak against the second gym leader, Nessa, who specializes in water Pokémon. Grookey, on the other hand, will be indifferent to attacks from Milo and have an advantage against Nessa.

Later in Pokémon Shield, Scorbunny’s fire moves are a huge boon against Melonie, the Ice gym leader. However, that same gym in Sword is run by the rock gym leader, Gordie, who is equally difficult to best with all three starters. This is often the case in Pokémon Sword and Shield, all of the starter Pokémon are viable options, but simply during different intervals.

Instead of worrying about how crucial the choice may feel, just pick the one that makes you feel the best. The rest will be available for trading online. They’re all going to become powerful Pokémon later on, all you need to do is cherish it.

If you’re ever pressed for a certain typing however, just hop over to the Wild Zone. A large variation of Pokémon can be found there and there’s certainly at least one that will give you the boost you’re looking for.

Pokémon Sword and Shield are currently available for Nintendo Switch