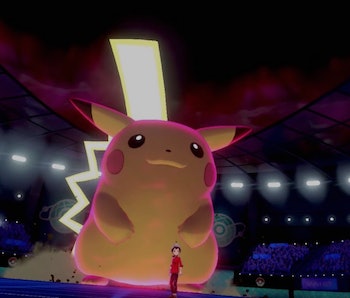 It’s been a long wait, but the release of Pokémon Sword and Shield is nearly here. Each new generation of Pokémon titles comes with two things: a fresh batch of adorable ‘mon to collect and tweaked gameplay mechanics that alter the flow of battle. Generation VI added Mega Evolutions, temporary transformations that increase a Pokémon’s stats and alter their appearance. Mega Evolutions required a specific Mega Stone for each ‘mon and could only be used once per battle. Generation VII introduced Z-Moves, making one-shot powerful attacks a bit more accessible by requiring an item correlated to a particular type, rather than having one specific to each Pokémon. Rather than bringing back Mega Evolutions and Z-Moves in Sword and Shield, Generation VIII introduces a new battle mechanic called Dynamax, which essentially combines the two. Here’s what you need to know about the distinctions between Dynamax and Gigantamax, and how to use these forms in battle.

Dynamax is a transformation achievable by all Pokémon. Their trainer must have a Dynamax Band and be in a Dynamax-compatible area, such as a Gym Battle or Max Raid Battle.

Once Dynamaxed, the Pokémon will undergo a few changes. Visually, the it will become dramatically larger. Its stats will also increase significantly and their original moveset will be replaced with more powerful Max Moves. The Max Moves acquired depend on move typing prior to Dynamaxing. (For example, any Fire attack would change to Max Flare, a Fighting attack would change to Max Knuckle, etc.)

All status-altering moves — such as Foresight and Leer — will turn into Max Guard. Using Max Guard is the only way to negate Max Moves. Standard defense tactics, like Protect and Spiky Shield, can’t completely block a Max Move.

There are some limitations to Dynamaxing. Dynamax transformations only last three turns. In Max Raid Battles, only one trainer per group can use Dynamax throughout the whole battle, so plan carefully. You might want to save that transformation for a Gigantamax instead.

Gigantamax is a rare form of Dynamaxing that also increases the Pokémon’s size, but more dramatically alters their appearance, much like Mega Evolutions in past games.

Gigantmax-capable Pokémon who typically have an additional evolution stage — like Eevee, Meowth, and Pikachu — cannot evolve.

How does one obtain a Gigantamax-capable Pokémon in Sword and Shield?

While any Pokémon can Dynamax, only a few have the ability to Gigantamax. What’s more, every not Pokémon of a Gigantmaxable species can actually pull off the transformation. For instance, though Charizard has a Gigantamax form, the one you have isn’t guaranteed to be able to do it.

Gigantamax-capable Pokémon are typically found through Max Raid Battles. From the November 15 launch until January 2020, players will see increased odds of encountering Gigantamax Butterfree and Drednaw in Pokémon Sword and Corviknight in Pokémon Shield.