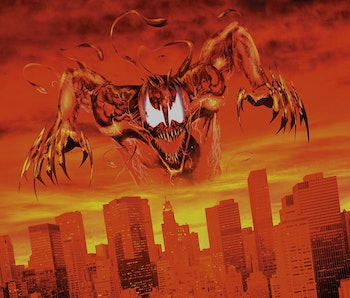 If the post-credits scene featuring Woody Harrelson namedropping Carnage with all the grace of a drunk sumo wrestler wasn’t enough to convince you who the villain of Venom 2 would be, we’ve got some good news. To quote a man in a bad wig, “It’s gon’ be Carnage.” While an official announcement has yet to be made, we recently got just about the next best thing from lead actor Tom Hardy’s Instagram.

Earlier this week, he shared a piece of fan art by user @warpaint513 that seems to confirm what we’ve long expected: Venom 2 will see the debut of ‘90s comic icon and sadistic symbiote extraordinaire Carnage. The character, whose human vessel Cletus Kasady appears (played by Woody Harrelson) in a brief post-credits scene, seems to be set to square off against Tom Hardy’s Eddie Brock/Venom in the film’s sequel.

The sequel will see director and motion-capture icon Andy Serkis in the director’s chair, with Hardy and Michelle Williams (who played love interest Anne Weying in the original) returning as well as Harrelson. It’ll also see Naomie Harris joining, who’s rumored to be playing Shriek in the film.

There’s no telling what storyline the film will utilize, though the long-standing hope that they adapt the massive comics crossover Maximum Carnage is far from out of the question. The story sees Carnage escape from prison and create a “family” of evil symbiotes — including the aforementioned Shriek. All of the pieces are in place for the story to be adapted — or most of them are, at least.

The original story is a 14-part epic that saw characters from all across the Marvel universe, get involved, including Captain America and Spider-Man. The rights to many of those characters reside with Marvel Studios these days, so some ample rewrites may be necessary if the storyline is to be properly adapted. However, all of the key players remain under the Sony umbrella. We’ll just have to wait and see who shows up for the action.

Expect Venom 2 to hit theaters in late 2020. For now, prepare yourself for absolute carnage.