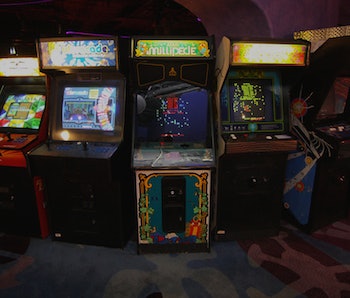 While entertainment is booming — the city raked in $27 billion from tourism in 2013 — young gamblers have yet to pick up the post-2008 slack. “Millennials,” game designer Darion Lowenstein tells Inverse, “pretty much do not touch slot machines. When they go to Vegas, it’s dancing and drinking and clubs and Calvin Harris.”

The slot machine, which has existed in various incarnations since the 1890s, is now almost entirely the domain of the 50-plus cohort. Have levers and buttons and Wheel of Fortune-themed cabinets lost their luster? “When the level of interaction is pushing a button for 6 seconds,” says Lowenstein, “you can go Walking Dead on it but I’m not going to be interested.”

Vegas game designers believe they have a simple solution to coax millennials into waging their wages: Keep ‘em stimulated. That means gamifying games, removing the element of chance to whatever degree that’s possible. And the Nevada legislature is on board with a newly approved-law, SB9, that paves the way for these hybrid games.

Producers like Lowenstein — whose gaming nerd cred includes stints at Rockstar, Electronic Arts, and Activision before ditching consoles for mobile phones — intend to midwife these adult arcades. Lowenstein works at Gamblit Gaming, maker of such games as Police Pooches vs. Zombie Cats In Time, Lucky Words, and Raze. The games appear to be based on the true stories of Angry Birds, Words with Friends, and Risk, the twist being that you can wager money on all of them. The other twist: You can currently only play them on mobile devices in the U.K. But should SB9 crystallize into law as expected, you might just be able to aim a Police Pooch at a Zombie Cat in the Mirage by 2016.

“You’re not gonna go from a slot machine to Call of Duty, where if you make all the headshots you win a thousand dollars,” says Lowenstein. Casino operators want to avoid hordes of crack gamers storming the gates. Better the devil you know, especially when that devil is a gamblified Candy Crush. The first gen of gambling games has two goals: To churn social gambling into the mix, pitting friends against each other over, say, a coffee-table sized touchscreen and making it easy to lay down money. The third, unstated goal: Avoid becoming Atlantic City or Zynga.

Let’s say a normal payback percentage is 90 percent — you get 90 cents spit back, on average, for every dollar you spend. It’s plausible you’ll see a skill-luck game where that payback increases: After you beat the boss, it bumps up to 92 percent, or maybe 95 percent when you finish a particularly tough level. It’s never going to be a dollar — for obvious reasons — but it could move in that direction.

And if that sounds far fetched, it’s worth remembering that successful gambling trends have a way of exploding. Less than a hundred people played in the World Series of Poker in 1980; in the mid-’00s heyday of Texas Hold ‘Em, the player count grew to over 8,000. Lowenstein believes we might see Neo Geo-like systems that play a variety of gambling games on one console, or adult arcade versions of popular mobile games. Millions and millions of downloads are impressive, sure, but the “big screen arcade experience” will still have a certain cachet for developers who spent their formative years in arcades.

Should games like these take off — and Gamblit Gaming’s not the only company banking on this — it could help usher in the intramural eSports era and the dawn of gambling palaces built on Street Fighter and Mario Kart. It will be nostalgic, but also cash-centric; not a hard sell for the folks currently walking past the slot machines.