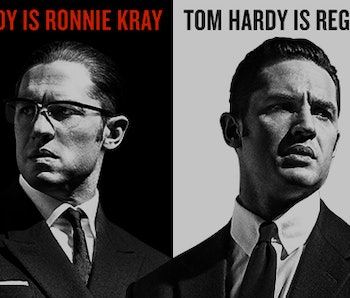 Most studios simply ignore bad reviews and run whatever nice thing Peter Travers says in Rolling Stone, but the folks behind Tom Hardy’s new movie, Legend, in which he plays a pair of British gangster twins, took a different approach. They put the bad review on the poster for all to (kind of) see.

See if you can spot how it handled The Guardian’s two-star review:

If you’re thinking a movie can’t possibly be so brazen as to put a two-star review front and center, in between Tom Hardy #1 and Tom Hardy #2’s heads, you’re wrong. It’s wildly misleading, but that’s okay because it’s also kind of badass and this is, after all, a take-no-prisoners gangster flick.

More like this
Entertainment
Sep. 13, 2022
Everything you need to know about The Legend of Zelda: Tears of the Kingdom
By Willa Rowe
Entertainment
18 hours ago
Sauron cultists? Rings of Power may have just solved the show's biggest mystery
By Alex Welch
Science
18 hours ago
Puerto Rico: 8 images reveal devastation left by Hurricane Fiona
By Jennifer Walter
Share: