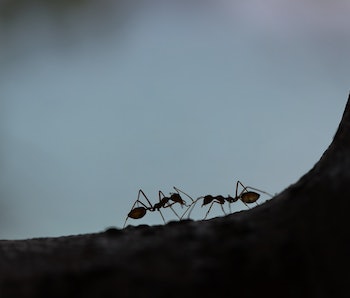 The term “ant trap” tends to be a misnomer of sorts. Essentially, ant traps a more akin to bait stations. Perhaps it would be helpful to first understand how ants conduct themselves in the first place.

Ants spend a significant portion of their lives in a concerted effort to find food. They set out on missions to find food and bring it back to their colonies. As they search ants leave pheromone trails to find their way back and to alert the others of their progress. After ants find a new food source it doesn’t take long before a few thousand of their friends show up to partake in the festivities. And what that loosely translates to is that you now have an ant problem.

So, it’s time to play offense and follow that up with a little defense. Here are a few of the best ant traps on the market for your consideration.

Terro liquid ant bait is a container filled with a sweet liquid laced with poison. Technically the active ingredient is borax which is a common mineral most often found in laundry detergents. While borax is completely safe for us it is deadly to ants. With the Terro liquid ants carry the liquid back to their colonies and according to Terro the nest should be destroyed in two weeks. Users like Terro because it’s effective and easy to use.

The Amdro ant bait uses hydramethylnon as the active ingredient. While it is highly effective when it comes to eradicating your ant problem, it is quite toxic. In that case, you’ll want to be careful using it around pets. Toxicity aside if you’re looking for an effective ant killer this is it. Not only does Amdro kill the colony but it also kills the queen. If you know anything about ants, in order to fully solve your problem, you have to go directly to the source. Amdro can kill 14 different species of ants and it can take up to one week to see results.

Most people would appreciate the Maxforce ant bait gel because of its ease of use. The sugar solution is conveniently packaged in a syringe and users simply need to squeeze it into visible holes and cracks. Users also like the Maxforce gel because after applying the gel hardens and effectively seals the crack or hole blocking the path of any would-be diminutive intruders. Users can expect to see results in three to five days and the solution remains is effective for up to two weeks after application.

More like this
Culture
13 hours ago
These stunning home upgrades under $35 make your home seem so much more expensive
By Rebecca Martinson
Culture
7.2.2022 6:31 PM
Of all the cheap ways to make your home look nicer, designers say these 40 look the most expensive
By Christina X. Wood
Culture
7.2.2022 1:15 AM
The 50 best cheap home improvement products skyrocketing in popularity on Amazon
By Christina X. Wood
Share: