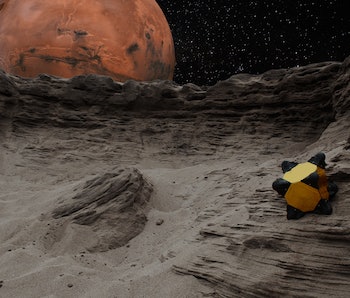 NASA’s future explorer of desolate space rocks is straight-up adorable. To overcome the problems of super low gravity on asteroids and comets, engineers have come up with a robot that rolls and tumbles its way through space. They call it a hedgehog. Aw.

A traditional Mars rover would only weigh a few pounds in the microgravity of an asteroid. The very movement of its treads could launch it off the surface — picture a rover tipped like a cow onto its back, hurtling helplessly through the void. NASA engineer Robert Reid explains in this video:

The cubelike hedgehog robots operate with an internal set of flywheels, which spin and then quickly brake to propel the device in any direction. NASA has already tested prototypes of the little guys, simulating a low-gravity environment and giving the bots different surfaces to navigate: sandy, rough and rocky, slippery and icy, and soft and crumbly.

The engineers even figured out how to get the hedgehogs to do a “tornado” maneuver, spinning quickly in place to get upward lift and get out of a tight spot. We imagine that looks something like this:

(For a more accurate idea of what it looks like, watch the video from NASA above, if you already haven’t — you can see the actual tornado maneuver in action.)

Besides the fact that landing a spacecraft on a comet or asteroid is an insane feat of engineering and just damn cool, scientists hope that space rocks can answer some basic questions about life itself.

The planets of the solar system are basically just accumulations of space rock, explains NASA. “At the very beginning of our solar system, before there was an Earth, Jupiter or Pluto, a massive swirling cloud of dust and gas circled the young Sun. The dust particles in this disk collided with each other and formed into larger bits of rock. This process continued until they reached the size of boulders. Eventually this process of accretion formed the planets of our solar system.” They may look like inert space grit now, but those are cooled chunks of proto-solar system out there.

By learning more about asteroids, NASA hopes to find clues to the beginning of life on Earth. “For the first billion years of Earth’s existence, comet and asteroid impacts rendered Earth’s surface too hot to allow the existence of sufficient quantities of water and carbon-based molecules for life. Life on Earth began at the end of this period, some 3.8 billion years ago.”

NASA and the European Space Agency made history last year when they successfully landed the Philae lander on the surface of Comet 67P/Churyumov-Gerasimenko.

Future comet-related missions are insanely ambitious. In the next decade, NASA plans to send some space cowboys to lasso and wrangle an asteroid and put it into orbit around the moon so that it can hang out there, and they can study it. When they do? Bring in the hedgehogs.

Here’s an adorable mental image: According to NASA, because the hedgehog bots are relatively inexpensive to manufacture, they could send a whole litter of them on one mission. “The mothership could release many robots at once or in stages, letting them spread out to make discoveries on a world never traversed before.”

Fly, little hedgehoglets, and tell us about the sun when it was itself a wee pup.

More like this
Science
6.29.2022 6:30 PM
JWST will unlock the mysteries of these 7 peculiar exoplanets
By Jennifer Walter
Science
22 hours ago
Webb Telescope will take aim at one of Hubble's most iconic targets
By Georgina Torbet
Science
8 hours ago
Behold! Curiosity discovers Martian rocks contain an essential ingredient of life
By Allison Parshall
Related Tags
Share: