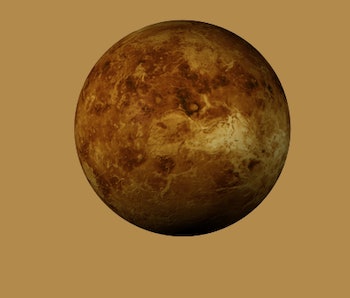 To an alien astronomer light-years away, observing the solar system through a telescope, it would be virtually indistinguishable from our own planet. But to know the surface conditions of Venus — the temperature of a self-cleaning oven, and an atmosphere saturated with carbon dioxide with sulfuric acid clouds — is to know that it’s anything but Earth-like.

So how is it that two planets so similar in position, formation, and composition can end up so different? That’s a question that preoccupies an ever-growing number of planetary scientists, and motivates numerous proposed Venus exploration efforts. If scientists can understand why Venus turned out the way it did, we’ll have a better understanding of whether an Earth-like planet is the rule — or the exception.

I’m a planetary scientist, and I’m fascinated by how other worlds came to be. I’m particularly interested in Venus, because it offers us a glimpse of a world that once might not have been so different from our own.

The current scientific view of Venus holds that, at some point in the past, the planet had much more water than its bone-dry atmosphere suggests today — perhaps even oceans. But as the sun grew hotter and brighter (a natural consequence of aging), surface temperatures rose on Venus, eventually vaporizing any oceans and seas.

With ever more water vapor in the atmosphere, the planet entered a runaway greenhouse condition from which it couldn’t recover. Whether Earth-style plate tectonics (where the outer layer of the planet is broken into large, mobile pieces) ever operated on Venus is unknown. Water is critical for plate tectonics to operate, and a runaway greenhouse effect would effectively shut down that process had it operated there.

But the ending of plate tectonics wouldn’t have spelled the end of geological activity. The planet’s considerable internal heat continued to produce magma, which poured out as voluminous lava flows and resurfaced most of the planet. Indeed, the average surface age of Venus is around 700 million years — very old, certainly, but much younger than the multi-billion-year-old surfaces of Mars, Mercury, or the moon.

The Exploration of Planet 2

The Venus-as-a-wet-world view is just a hypothesis: Planetary scientists don’t know what caused Venus to differ so much from Earth, nor even if the two planets really did start off with the same conditions. Humans know less about Venus than we do about the other inner solar system planets, largely because the planet poses several unique challenges to its exploration.

For example, radar is needed to pierce the opaque, sulfuric acid clouds and see the surface. That’s a lot trickier than the readily visible surfaces of the moon or Mercury. And the high surface temperature — 470 degrees Celsius (880 degrees Fahrenheit) — means that conventional electronics don’t last more than a few hours. That’s a far cry from Mars, where rovers can operate for more than a decade. In part because of the heat, acidity, and obscured surface, then, Venus hasn’t enjoyed a sustained program of exploration over the past couple of decades.

That said, there have been two dedicated Venus missions in the 21st century: the European Space Agency’s Venus Express, which operated from 2006 to 2014, and the Japan Aerospace Exploration Agency’s Akatsuki spacecraft currently in orbit .

Humans haven’t always ignored Venus. It was once the darling of planetary exploration. Between the 1960s and 1980s, some 35 missions were dispatched to the second planet. The NASA Mariner 2 mission was the first spacecraft to successfully carry out a planetary encounter when it flew past Venus in 1962. The first images returned from the surface of another world were sent from the Soviet Venera 9 lander after it touched down in 1975. And the Venera 13 lander was the first spacecraft to return sounds from the surface of another world. But the last mission NASA launched to Venus was Magellan in 1989. That spacecraft imaged almost the entire surface with radar before its planned demise in the planet’s atmosphere in 1994.

In the last few years, several NASA Venus missions have been proposed. The most recent planetary mission that NASA chose is a nuclear-powered craft called Dragonfly, destined for Saturn’s moon Titan. However, one proposal to measure the composition of the Venus surface was selected for further technology development.

Other missions being considered include one by the ESA to map the surface at high resolution, and a Russian plan to build on its legacy as the only country to successfully put a lander on Venus’ surface.

Some 30 years after NASA set course for our hellish neighbor, the future of Venus exploration looks promising. But a single mission — a radar orbiter or even a long-lived lander — won’t solve all the outstanding mysteries.

Rather, a sustained program of exploration is needed to bring our knowledge of Venus to where we understand it as well as Mars or the moon. That will take time and money, but I believe it’s worth it. If we can understand why and when Venus came to be the way it is, we’ll have a better grasp of how an Earth-size world can evolve when it’s close to its star. And, under an ever-brightening sun, Venus may even help us understand the fate of Earth itself.

This article is originally published on The Conversation by Paul K. Byrne. Read the original article here.