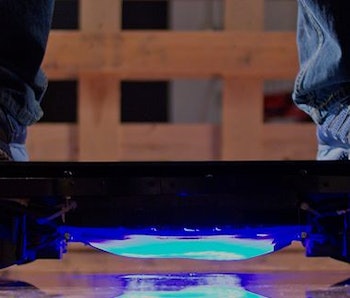 Someday, students will study Back to the Future Part II as the Rosetta Stone for all technological advances. Not only are we building hoverboards, because they just looked sweet, but now the same technology could give us the power to crossover into Star Trek territory and build a tractor beam.

Today Arx Pax, the makers of the Hendo Hoverboard announced a partnership with NASA to find new uses for its Magnetic Field Architecture, also known as MFA tech. The hardware, little understood outside of Arx Pax which understandably keeps trade secrets close to the vest, creates a controllable magnetic field allowing the hoverboard to hover above any surface that’s conductive.

NASA sees potential there to use magnetic fields to simultaneously attract and repel satellites, therefore moving them without having to worry about banging up all that expensive equipment.

As Gizmodo notes, the hoverboard itself only sort of works, and is little more than a proof of concept. The long game was always to get the tech strong enough to be able to move houses. That’s still way, way, way out in the future but you have to start somewhere and a partnership with NASA can’t help but speed the process along.

More like this
Science
4 hours ago
NASA just built the best map of Mars to date using 51,000 images
By Evan Gough and Universe Today
Science
10 hours ago
25 years ago, NASA landed its first rover on Mars — and catalyzed the search for life
By Doris Elín Urrutia
Science
7.3.2022 1:30 PM
NASA move could help the International Space Station stay in orbit without Russia
By Nancy Atkinson and Universe Today
Related Tags
Share: