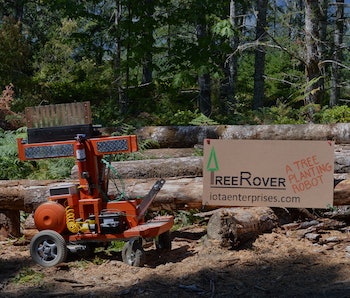 Two college kids from Canada have built a tree-planting robot that they hope will one day be used to reforest the province of British Columbia, which has in recent decades been ravaged by pine beetles and extreme fire seasons.

“There is going to be a big replenishing effort at some stage down the road and it would be neat if the TreeRover could be scaled up then,” Nick Birch, one of the inventors, told the Times Colonist.

Up where I live in Canada, going tree-planting is a bit of a ritual for adventurous college kids looking to make good money and escape the constraints of civilized society. Will the occupation of tree-planter go the way of the dodo bird thanks to this (admittedly cute) little bot? As a former tree-planting human myself, I’m skeptical.

The thing is, humans have already figured out how to be extremely efficient tree-planting machines. Here’s a video clip of a planter working at a healthy clip of about 15 trees a minute:

And here’s a video of the TreeRover planting a single tree:

The mechanics of planting a tree are straightforward: Open a hole, put in a tree, close the hole. In practice, though, it’s a lot more complicated. Tree-planters navigate rough, often-steep terrain that is covered with downed trees and scattered debris. They have to think about the best way to fill a plot of land to achieve a specific tree density, using only patches of soil that suit the particular species they are planting. (You’ll notice in the first video, the tree-planter gets called out for a “duff shot,” meaning his tree was planted in loose debris instead of organic soil.)

Despite these challenges, a moderately skilled human can plant 2,000-3,000 trees a day, earning only about 10 cents a tree for the labor. There appears to be an endless supply of young guns ready to test their abilities at the gruelling work, despite falling wages.

The inventors of the TreeRover are surely aware of the comparative disadvantages of their machine compared to eager 19-year-olds. That knowledge is probably why they’re raising money to fund technical upgrades for a “bigger, smarter, stronger tree planting machine.” If you want to help them get there, there’s an Indigogo campaign with your name on it (and, if you donate $20, a tree with your name on it.)