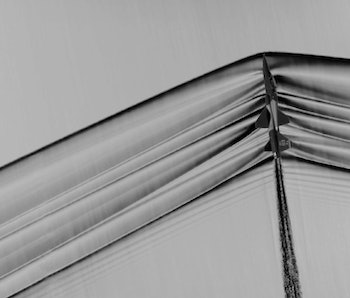 We already know what it looks like when a plane breaks the sound barrier — just do a quick Google search and see for yourself if don’t already know. But NASA won’t settle for just your average images — and that’s why they’ve used a 150-year old photography technique from Germany to take new pictures of supersonic shock waves. And the result, as you can see above, is awesome.

Over the Mojave Desert, NASA researchers are using what’s called Schlieren imagery — invented in 1864 by the physicist August Toepler — to help visualize the flow phenomena associated with aircraft traveling at speeds of Mach 1 and above. The goal is to use this imagery to help design quieter supersonic transport. Current rules in the U.S. prohibit unrestricted overland supersonic flight, partly because of how much noise these aircraft make in the air. It’s one of the reasons supersonic commercial flight never — ahem — took off.

Bad jokes aside, the images tell a lot. Schlieren imaging helps illustrate the changes in air flow as aircraft make the loud burst through the sound barrier. NASA used a modern-day version of the technique called background oriented schlieren (BOS), which had been used successfully for imaging in wind tunnel tests. In this latest test, NASA snapped pics of the supersonic jet — a T-38C from the Air Force Test Pilot School — from another plane flying thousands of feet above. The resulting image is actually a composite of multiple frames (with the desert background removed) that shows the full shockwave all at once.

We won’t get to enjoy pics like these when we’ve evacuated Earth for other planetary colonies, so savor them while they’re here.