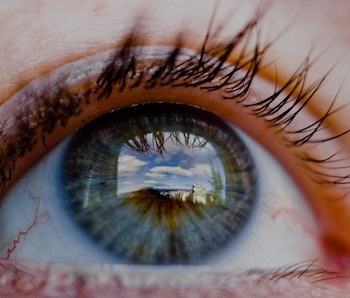 We all have blind spots. It’s not a metaphorical failing, just a physiological one that comes courtesy of a gap in the back of our retinas without photoreceptive cells. Look: No organism is perfect.

By way of example, this video will show you that you do, in fact, have a blind spot. (I had to play it a couple of times, put the video into fullscreen, and focus on the circle from about three feet away — but yes, the left cross vanishes if you cover your right eye while focusing on the circle with your left eye. If you still can’t get the cross to disappear, remember to pull a Raiders of the Lost Arc and fight the urge to look directly at it.)

From a purely anatomical standpoint, there’s nothing you can do to get rid of this spot. But new research indicates that, with training, you might be able to shrink it a bit.

Paul Miller, a psychologist at the University of Queensland in Brisbane, Australia, and his colleagues devised a way to get 10 subjects to reduce the size of their blind spots. Every weekday for four weeks, the researchers moved a ring-shaped stimulus at the periphery of a subject wearing a patch, at either the right or left side blind spot. “Over time, we found that we could reduce the size of the stimulus by about 10 percent,” Miller told Inverse. “That is, people became sensitive to things they apparently could not see prior to training.” When the scientists decreased the size of the ring, people could still report the direction it moved more than 70 percent of the time, the scientists wrote Monday in the journal Current Biology.

Before you go mad with the vision of new superpowered eyes, well, maybe cool your jets just a bit. “For the most part, our physiological blind spots don’t interfere with normal vision. The regions of blindness are in different locations in each eye, so each blind spot is compensated for by an area of functional vision in the other eye,” says Miller. “So while our training paradigm is quite simple (and feasible for anyone to run), it’s unlikely to grant you better vision than you’d get by simply walking around with both eyes open.”

And, though training helps, you’ll eventually hit an insurmountable wall. “It’s not possible to develop photosensitivity within the physiological blind spot itself, “ Miller points out. “Our participants showed a maximum reduction in blind spot size after about 10 days of training, which likely suggests that they had hit this limit.”

What gets Miller most excited are the ramifications for pathologies like macular degeneration. The reduction in blind spot size, the researchers believe, comes about because the neurons that are responsible for viewing the locations near blind areas become more receptive, and these souped-up cells get better at parsing information around the spot. Miller hopes that people with localized blindness, therefore, could benefit from this technique. “In following this our next step is to optimize our training protocol in normally sighted people,” he says, “and then see if it can similarly improve sensitivity within such cases of pathology.”

More like this
Science
7.2.2022 12:00 PM
Why is my cat scratching furniture? The answer might surprise you
By Tara Yarlagadda
Science
6.27.2022 11:00 AM
Letting your cat go outside could spread “life-threatening” parasites — new research
By Amy Wilson, Scott Wilson and The Conversation
Science
6.26.2022 11:00 PM
The powerhouse of the cell has a more complicated origin than we thought
By Viviane Callier and Knowable Magazine
Related Tags
Share: