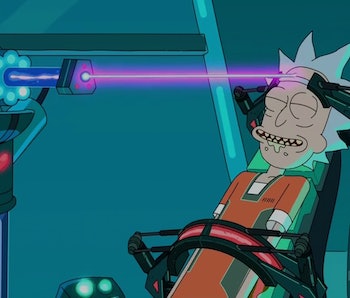 Would you welcome Rick into your home? It is, no doubt, the eternal question in all modern relationships. Is he a bad influence? Is he dangerous? Should he be allowed to play with the children? Or is he guiding them — tough love style — into the future they will live in with his disregard for the laws of physics and decency?

For parents, too, this is a difficult question. Would you be considered a helicopter parent if you did not allow Rick to take your child to another dimension, some other part of the universe, back in time, or whatever using his crazy scientific experiments? Or would you be protecting them from certain trauma by banning Rick’s unconventional influence?

Which side of these arguments are you on?

You don’t, fortunately for your children and relationships, ever have to decide this. Rick is — thankfully! — a cartoon character. But you can certainly debate it.

And while you are at it, why not wear — and play with — some slick Rick and Morty swag?

We rounded some up for ya to make that part of the equation easy. (You are on your own for the existential relationship and parenting questions. We want no part of that!)

Pull this wallet out when you are kicking in for your portion of dinner and alliances will form around the table. Those who are with you might suggest a nightcap at their place and a little Rick and Morty rerun marathon. The uninitiated will probably find the imagery coarse and a bit shocking. Haters will, as ever, hate.

Now you know. It won’t save you any money but it will help you read the room.

Add Morty to your super-geeky collection of action figures. He’s armed. But is he dangerous? That’s up to you. He’s certainly on another adventure with gramps and that might — or might not — be a good thing.

If you have a curio case full of action figures, you might as well go full nerd and add this one to it.

Do you have a grandchild? No? Too bad. Because this is the perfect opportunity to ironically gift that child a backpack his mother will let him carry without understanding that you intend to become a questionable influence on that child’s life. A niece? A nephew? Child of your own? That’ll do.

Whatever side of the parenting debate you come out on, this is only — after all — a backpack. And those are useful.

It’s a nice one, too. And whatever kid you give it to — even if that kid is all grown up — will appreciate the fandom.

Monopoly Rick and Morty Board Game

A great addition to board game night! Park Place and all the locations in New York are so last generation! This game updates the properties and streets to the Multiverse! Travel through the Cromulon Dimension, Gazorpazorp and Planet Squanch. Buy properties. Build an empire. This is much more our speed!

Is that debate over the quality of Rick’s influence on Morty still raging? Split this deck of cards and settle it. Or just play some cards. The imagery on your playing cards is an opportunity for self expression. It does not have to be plain, the usual, or even dirty. It could show your alliances or just your appreciation for humor.

Okay, it’s been a long time since we played Operation and it’s a silly game. (It says so on the box.) But this seems worth a reprisal. Not just a doctor. Not just an unknown patient. Rick is doing the operating. And is that… Santa! While the kids look on in horror?

Awesome. Bring it. We want to play this one.