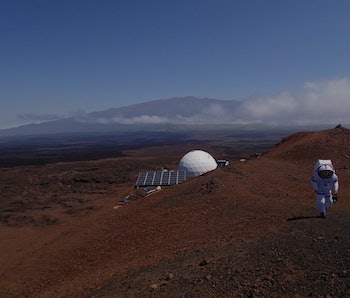 This is the true story, of six strangers picked to live in a dome, work together, and have their lives scrutinized for the good of future human space exploration. To find out what happens when scientists stop being polite and start getting real, well, check back in a year.

A French astrobiologist; a German physicist; and an American pilot, architect, journalist, and soil scientist have started a year-long isolated experiment on a barren volcano in Hawaii to shut themselves off from society. Their job is to conduct the most extensive Nasa-sponsored research yet in preparation to make our first journey to Mars.

The experiment, which pulled together $2.2 million in funding and is in collaboration with the University of Hawaii, is taking place in a dome 36 feet in diameter and 20 feet tall. Each crew member has a small room with a single cot and a desk, and will eat only powdered and canned foods that could potentially last the journey to the red planet. There will also be limited access to the internet. So it basically sounds like freshman year of college.

In an effort for some verisimilitude on the surface of the red planet, any strolls outside of the dome will require the scientists to wear faux spacesuits.

A year is no short hiatus from the rest of life, but it should also be considered a down payment on any Mars trips. Missions on the International Space Station run six months at a stretch, and unmanned missions to Mars now take eight months. Manned missions are estimated to take somewhere between one and three years, so NASA hopes to document the effects of extended isolation, plus have each crew member conduct habitability experiments in their given fields once in the dome. NASA previously conducted similar preliminary experiments of four months and eight months. No one pulled a Shining on those.

Anyone who comes unhinged is better doing so on terra firma than on 140 million miles away. On her blog, crew member Sheyna Gifford seemed optimistic. “The rest of the world, our tiny world, has been left for us to find,” she said. “Broken. Unbroken. In a tangled, fantastic disarray. We made it this far. I can’t see us not going forward, together, unto whatever waits beyond the horizon.”

We’ll check back in a year.