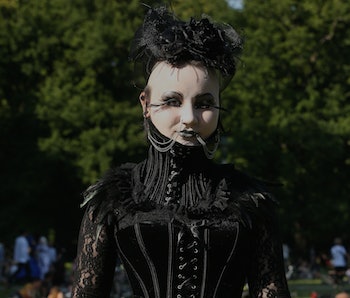 A new study appears to prove that teenagers who strongly identify with the goth subculture are far more likely to be depressed and hurt themselves. But it’s not that being goth causes them to suffer as much as they’re expressing their real pain by being goths.

The study, published in the Lancet Psychiatry Journal, found goths at age 15 were three times more likely to have clinical depression and five times as likely to self-harm at age 18. Whether they’re any better or worse at seeking professional help than other subgroups remains unclear, but embracing goth culture may be a sort of accidental cry for help.

Researchers studied 3694 teens from different subgroups, self-identifying as ‘sporty,’ ‘popular,’ ‘skaters,’ ‘chavs,’ ‘loners,’ ‘keeners,’ and ‘bimbos,’ as well as their morbid peers. Chavs, in case you don’t spend time in England, are working-class loudmouths — the sort of people who wear trucker hats back home in the old U.S. of A.

Anyway, it’s something to keep in mind next time you see some kid in eyeliner. Just because you don’t get their way of expressing it doesn’t mean the pain isn’t real.

It’s also worth noting that there’s already a bit of a pushback on the study. At least one expert has come forward to point out that goth music can be uplifting and that subculture identification may be a form of pain management rather than an expression of grief.