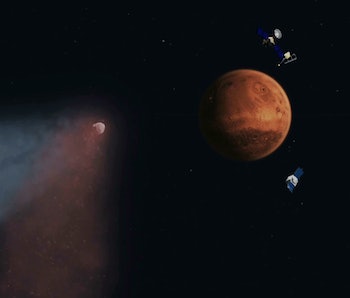 You’ve already seen it on Facebook or Twitter or wherever you turn for gossip and lies. Every year, the rumors go around that on August 27, you’ll be able to see “two moons” in the sky — one being the actual moon, and the other being Mars. And every year those rumors are wrong. When that happens, the apocalypse will be upon us.

It all started way back in 2003. The U.S. had just invaded Iraq for the second time. LeBron James was starting his first stint with the Cleveland Cavaliers. People still listened to 50 Cent. It was a weird time. On August 27 of that year, Mars did something strange, something it doesn’t normally do. It came slightly closer to Earth than it has in a very long time. The planets were 35 million miles apart, closer than they had ever been since the time Neanderthals roamed the earth. That’s about three light-minutes apart.

And it was cool! Mars looked like a bright ball of fire in the night sky.

And, back then, people also said Mars was going to be as big and bright as the moon. They were wrong then, and they are still wrong today, but that hasn’t stopped this “double moon” rumor from rearing its ugly head every damn year.

Mars sometimes comes into view around late August, but it’s nowhere near as bright as an August full moon. For all of 2015, Mars has been pretty shrouded. It will probably be that way for the rest of the year.

Mars looks closer to a star in the sky than an actual hunk of rock. The Moon has a visible diameter that’s 140 times the diameter of Mars. And that makes sense — while the Moon is about one light-second away from Earth (roughly 240,000 miles), it can take as many as 20 minutes for a beam of light shot from our surface to reach Mars. This month, Mars has been more than 230 million miles from Earth, which is about as far away from us as it can get.

More like this
Science
5 hours ago
25 years ago, NASA landed its first rover on Mars — and catalyzed the search for life
By Doris Elín Urrutia
Science
6.28.2022 7:00 PM
Cosmic rays could erase evidence of past life on Mars
By Kiona Smith
Science
6.30.2022 5:45 PM
The Large Hadron Collider restarts next week — here's what it's hunting for
By Rahul Rao
Share: