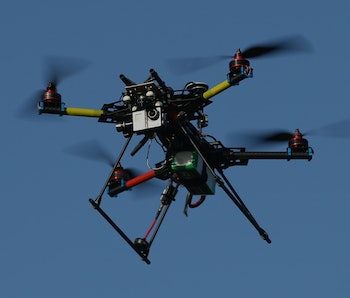 North Dakota just became the first state where cops have authority to use taser drones as a “less-lethal” policing method. The Daily Beast reports that this started with House Bill 132B, which banned weaponized drones and required police to get a warrant to use them as surveillance. The language shifted and by the time the final draft was ratified, the use of “less-than-lethal” weapons permitted police to load up on Tasers, sounds cannons, tear gas, pepper spray, and, yes, taser drones.

For now, let’s leave aside concerns over the depersonalization that occurs when an officer is piloting a weapon capable of delivering a 50,000 volt shock from several miles away. Let’s talk numbers.

As it stands, the Grand Forks Sheriff’s Office has two drones on loan from a California manufacturer and though they reported just 21 missions in the last three years the FAA’s tally is a hugely different 401 missions, which means someone isn’t being thorough about keeping records. Authorities further failed to track the duration of those flights. The department claims the drones are not used in criminal cases, but they were reportedly used to capture and arrest cattle thief Rodney Brossart in 2011.

Then there are the tasers. Tasers, though commonly used by law enforcement, are provably capable of being lethal weapons. By Taser International’s own estimates, the weapons are used in about 17,000 U.S. law enforcement agencies, deployed 904 times in a single day on average. At least two articles in circulation have concluded that Tasers can cause irregular heart rhythms and cardiac arrest. A year-long Miami New Times investigation found cops regularly using the guns when no arrests were taking place and no physical assault was occurring. The homeless were shocked; the mentally ill were shocked; in one case, authorities even shocked a six-year-old having a tantrum. Now, that’s one specific department, but it is also indicative of the fact that an armed officer is an officer likely to use force.

It seems unlikely removing police even further from these situations is going to do anything to curb that abuse. Whatever happens, North Dakota will hopefully do more to track it. The best thing about machines is that they always leave evidence.

More like this
Innovation
7.30.2022 11:00 PM
Here’s exactly how tech companies and apps conspire to track you 24/7
By Peter Krapp and The Conversation
Entertainment
8 hours ago
Star Wars fans are mad about a "mistake" in Andor — here's why they're wrong
By Dais Johnston
Innovation
8.9.2022 11:00 AM
This self-healing material could fix your dinged-up car in 30 minutes
By Molly Glick
Share: