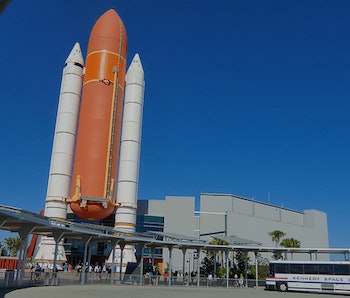 Almost fifty years ago, Americans walked on the moon for the first time. This summer, New Horizons, an unmanned American aircraft, took breathtaking snapshots of Pluto as it passed into deep space. NASA wants to go to Mars.

America’s next president will have the opportunity to capitalize on a lively interest in space exploration and colonization — and face the solemn task of not screwing it up. Below you’ll find how the field stands on the question of space exploration. If space is your final frontier, who do you want win?

Position: Calling himself a “space guy,” Bush, the former governor of Florida, where NASA’s main Cape Canaveral launching space is located, pledged to a group of union leaders in New Hampshire that he would increase NASA’s budget, as well as spending on aerospace research and development. “I think we need to be aspirational as a country,” he said, “because no one else is going to do it.”

There’s even a quarter that Governor Bush donated to the project manager of New Horizons, the unmanned aircraft that recently passed Pluto, which all but proves Bush is ready to throw money at the problem.

Position: One of Clinton’s favorite stories to tell is how she wanted to be an astronaut as a kid but was talked out of it by a letter she received from NASA:

She doesn’t object to the government partnering with commercial enterprises, which is a relief. Her 2008 campaign was tied to Lori Garver, a space policy advisor who eventually jumped ship to Barack Obama’s campaign. Garver became deputy NASA administrator under President Obama, and is credited with canceling the Bush-era Constellation space exploration program, which was viewed by some as a mistake.

Position: Cruz is the current chair of the Senate Subcommittee on Space, Science and Competitiveness. He seems determined to root out waste from NASA’s balance sheet, and has criticized the organization for straying from its “core mission” of outer space exploration.

He is proposing that NASA cut back on its earth sciences research. (Some attribute this to the fact that Cruz denies climate change is caused by human beings, and therefore can’t be amended by even NASA’s best efforts at research.)

A staunch advocate for a manned mission to Mars, Cruz says, “Our space program marks the frontier of future technologies for defense, communications, transportation and more.” Cruz is also hostile to the idea that the Russians control access to the International Space Station, and wants to speed up completion of NASA’s Commericial Crew program, a partnership with companies like SpaceX and Boeing to develop safe, manned aeronautical vehicles.

Position: In a Reddit AMA, Sanders, the American left’s favorite underdog, fielded a difficult question about his votes to cut NASA spending in 2012, 2000, and 1996. The always-candid Sanders said that while he didn’t remember the votes in question, they must be weighed against more difficult decisions like providing food for needy families or health care for the elderly. Aside from paying lip service to the ‘excitement” of space exploration, his campaign has talked very little about the endeavor.

Position: A harsh critic of NASA’s spending, Kentucky Senator Rand Paul’s proposed budget would cut NASA’s funding by 25%. The reason? “With the presence of private industries involved in space exploration and space tourism, it is time for NASA to look at ways to reduce spending.”

True to his Libertarian roots, Paul says he would turn over space exploration to the private sector and “realign” NASA’s goals, which would become “to continue to work with private sector industries to develop commercial space transportation services while also focusing on technological development that would link the NASA programs to the needs of business and industry.” It sounds like Paul is a supporter of the Commercial Crew endeavor (whether he knows it or not).

Position: As governor of Maryland, O’Malley launched a Space Business Development Initiative within his state’s larger Economic Development office that was intended to leverage the federal aeronautics facilities in Maryland. The initiative included a space-related business incubator and a proposed National Center of Climate & Environmental Information. In other words, O’Malley views the space race less as an exploratory question than an opportunity for economic growth.

In addition, O’Malley, an active Twitter user, took the opportunity to tweet shortly after the New Horizons spacecraft passed Pluto…

…so props for being aware.

Position: Despite the windy rhetoric, Trump hasn’t got much to say on the space question. All he’s done is brush off a question about manned Mars missions at a rally in New Hampshire. “Honestly,” the Donald said, “I think it’s wonderful; I want to rebuild our infrastructure first, ok? I think it’s wonderful.”

And while that may sound…mildly enthusiastic?, Trump’s body language in delivering the reply was mostly dismissive (fast-forward to the 47-minute mark.)

So, who is our Space candidate? It depends on how you parse the question. If you think NASA’s chief pursuit should be manned and unmanned space exploration, Ted Cruz is your surprise winner. If you think government is somehow interfering with space exploration, Rand Paul (or one of the wishy-washy respondents) could be at the top of your ticket. Both Jeb Bush and Hillary Clinton seem enthusiastic about expanding NASA’s reach, but don’t seem quite ready to make it a centerpiece of their respective campaigns. (Trump is indifferent, unless it involves building a wall.)

Cruz seems like the guy, but if you can’t bring yourself to vote for a hardcore conservative and you think exploration is a priority, your vote should probably go to O’Malley. The Maryland governor sounds downright enthusiastic about marrying the public goal of space exploration with private sector efforts to move skyward. Now that America has run out of west, he wants to go up.

More like this
Science
6.27.2022 12:00 AM
NASA lit 1,500 fires on the International Space Station — and discovered something new
By LAURENCE TOGNETTI and Universe Today
Science
6.30.2022 10:45 AM
These 5 objects could be Webb's full-color first images
By Kiona Smith
Science
6.30.2022 10:00 AM
Behold! Curiosity discovers Martian rocks contain an essential ingredient of life
By Allison Parshall
Related Tags
Share: