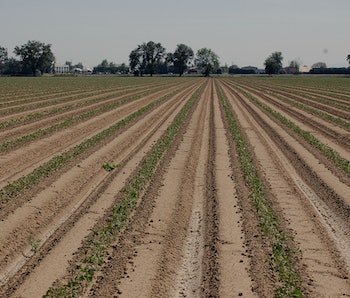 If California dries up completely, America’s going to get a whole lot hungrier. There’s no question its ongoing drought — the most severe on record — has taken its toll on the state’s agriculture, the nation’s biggest supplier of produce, but it hasn’t been clear just how badly the industry has been hit. Today, the Pacific Institute, an independent think tank, released the first analysis of the California drought on agriculture. The findings are grim.

Even though the amount of harvested land has declined to a 15-year low, the total revenue from farming has actually increased. In 2013, one year into the drought, crop revenue hit a record high of $34 billion; the next year’s revenue is the second-highest on record, dropping only by 1.4 percent. Similarly, 2014 saw a record high number of agricultural jobs.

It’s not the trend you’d expect from a state in the midst of the hottest and driest spell on record, but it’s also not one that can continue. The study found that the agricultural industry has managed to stay afloat because of hugely unsustainable groundwater pumping. This water, pumped from underground aquifers, serves as an important secondary supply of water for both farmers and municipalities — especially in times of drought. But the analysis found that farmers are overdoing it:

[T]he current use of groundwater far exceeds the natural rate of recharge. This has resulted in a decline of groundwater levels across large parts of the state, saltwater intrusion and other water-quality impairments, land subsidence, lost storage, and increased energy costs, among other adverse impacts.

If underground aquifers don’t have the time to replenish themselves, the consequences won’t just affect present-day Californians. Overpumping could cause the land to lose its ability to store fresh water altogether or allow contaminating salt water to rush in, forcing future generations to dig even deeper for water or find alternative water sources.

California farmers have employed a range of strategies to respond to the drought, including under-irrigating their fields, fallowing land, shifting crops, purchasing insurance, and pumping more groundwater. Water transfers have also mitigated the impact of the drought.

Some farmers have turned to drip irrigation, while others have switched from low-value to high-value crops to get more profit out of their water. The drought seems to have turned water into a sort of currency, with farmers selling their supplies of water to other farmers as well as to non-agricultural users, like other industries and municipalities. The report estimates that “water transfer” to non-farm users boosted total agricultural revenue by $66 million, making up for unproductive farms.

The Pacific Institute admits that the drought’s impact wasn’t nearly as bad as expected, but that doesn’t mean California farmers can relax. The study serves as a warning that the current emergency measures can’t be taken into the long term, especially as the state moves into “a future likely to see less water, more extreme weather, and greater uncertainty.”

More like this
Science
6.21.2022 10:45 AM
Ancient stalagmites point to a massive drought that upturned 6th century Arabia
By Allison Parshall
Science
6.23.2022 11:00 AM
Historic Yellowstone flooding and more: Understand the world through 8 images
By Robin Bea
Culture
6.28.2022 9:00 AM
8 sensational sci-fi shows and movies coming to HBO Max in July 2022
By Robin Bea
Share: