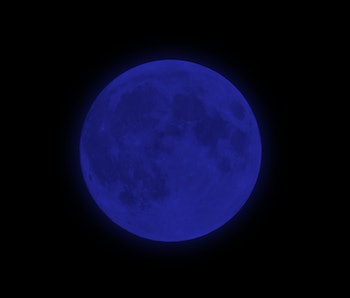 On Saturday night, the full moon and its weird effects will grace the night sky. It won’t be just any full moon, though — it’ll be a blue moon. It might not even be the kind of blue moon you’re thinking.

Despite the name, the blue moon will not be the color blue. It will look just like any other full moon — kind of a yellowish-white. The fact that “blue” is just a name probably won’t come as a surprise, but this might: There are two types of blue moon, and this one will be the weird kind.

The moon will be at its fullest at 5:11 p.m. Eastern on Saturday, and after the sun sets, will light up the sky. But if, like me, you truly had no idea that there were two types of blue moon — again, neither of which is actually blue — keep reading about this week’s lunar event.

The definition of a blue moon with which I’d always been familiar was the second full moon in a calendar month. Since a lunar cycle — the time from a new moon, to a full moon, and back — lasts about 29.5 days, and most months have 30 or 31 days, inevitably there will be some overlap, with the occasional calendar month including two full moons.

When a calendar month has two full moons, the second one is commonly referred to as a blue moon. This is the definition that I am most familiar with, as in the expression, “Once in a blue moon,” which refers to the fact that this rare occurrence usually only happens every two to three years (though two of them actually happened in 2018, in January and March). The next one will be in October 2020.

This definition also applies to the 13th full moon in a calendar year. Since 12 lunar months only have 354 days, some years will also have 13 full moons.

But Saturday’s blue moon isn’t either of these.

The OTHER Type of Blue Moon (Which Will Happen This Weekend)

The other definition of a blue moon, which I’d never heard of before this week, is a seasonal blue moon — the third full moon in an astronomical season that has four full moons.

(There’s a range of a few days that any of the solstices or equinoxes can fall on, since the Earth takes 365.25 days and not an even 365 to revolve around the sun, but we’ll save that discussion for another day. Today we’re talking about the moon.)

An astronomical season includes three months, so it would normally encompass three full moons. But since our seasons are divided by a solar calendar and not a lunar calendar, there can be overlap between lunar cycles and astronomical seasons. (Huh, it’s almost like time is made up.)

When this happens, and there are four full moons in an astronomical season, the third one is called a blue moon.

As EarthSky reports, the popular use arose through a mistaken interpretation of the Farmer’s Almanac back in 1946. Back then, the term referred to the 13th full moon in a calendar year, but the writer misinterpreted it to also mean the second full moon in a month.

Space.Com reports that the seasonal definition actually predates the calendar one, though, so arguably this month’s full moon is a classic blue moon.

The last one of these seasonal blue moons occurred in May 2016.

When Can You See the Blue Moon?

According to the US Naval Observatory, it will rise at around 8:00 p.m. in New York, but you can put your city in this form to find your local moonrise.

What Does It All Mean, Though?

While our names for moons use natural phenomena to mark the passage of seasons, time is ultimately a human creation. So to a significant degree, these nicknames we have to describe natural phenomena are just human efforts to impose order on a chaotic universe.

So does it really matter that a seasonal blue moon will rise this weekend? Not really. But does that make it any less incredible? No.

Regardless of what you call it, you can still step outside, gaze up at it, and marvel at your smallness in the face of the universe.