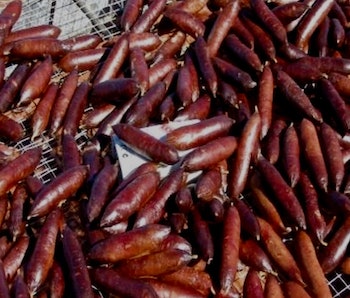 The Australian government is using a number of tools in its controversial ongoing mission to kill 2 million feral cats by 2020, but only one of them comes in sausage form. The invasive felines, which are decimating populations of native animals to a critical degree, are being baited and killed with poisonous sausages made from kangaroo meat and chicken fat, seasoned with herbs and spices, and spiked with a poison known by the cryptic name 1080.

Australia’s feral cat war is back in the public spotlight after it was featured Thursday in a New York Times Magazine article, which noted that the poisonous sausages, laced with an extract from Australian Gastrolobium plants and concocted by a man nicknamed Dr. Death, play a key role in the ongoing cull. Thousands of sausages are dropped either by air (aerial baiting) or tossed into cat zones by hand (ground baiting). Feral cats that eat them are poisoned and die, but through a stroke of evolution, native species that take a bite will generally be safe.

Non-sausage strategies used by the Australian government to reduce the population include trapping and shooting. In an area of Queensland called Banana Shire, the government even offers a $10 bounty for feral cat scalps “as an incentive towards declared animal pest control.” The sausages, in comparison, seem relatively humane.

A report from the Australian government states that baiting is recognized “as the most effective method for controlling feral cats when there is no risk posed to non-target species.” The bait is described as “similar to a chipolata sausage,” a thin, short sausage common in England and made using lamb or beef in Australia and served for breakfast. When served to feral cats as a final meal, the 1080-laced sausage is known as Eradicat, a registered trademark of the Western Australian government. It was invented by David Algar, Ph.D., the principal research scientist working for the state of Western Australia who is also known as Dr. Death; the NYT Magazine profile noted he studied cans of cat food to determine the flavors cats found most appetizing.

The chemical 1080 is the poison sodium monofluoroacetate, which occurs naturally in Gastrolobium pea plants and is also produced synthetically. Since Australia’s native animals — the Greater bilby, golden bandicoot, Gilbert’s potoroo, and many others threatened by the feral cats — evolved alongside these colorful poisonous peas, they are tolerant to the poison. For the same reasons, it’s lethal to any non-native animal that eats it, which includes cats and also pet dogs. (“Dog owners need to be aware,” notes the Western Australian government.)

There are no cat species native to Australia, but the 2 to 6 million feral cats that stalk the wilderness are thought to be descendants of the rat-trapping felines onboard the ships that first brought English marines and convicts to the nation’s shores in the late 1700s, according to the NYT Magazine.

Rather than dose the entire sausage with 1080, the poison is contained inside a hard pellet buried in the kangaroo meat as an added protection for other animals that might sneak a taste. The hope is that the feral cats, which swallow large chunks of their food whole, will ingest the pill so that it can overwhelm the animal’s physiological processes once it reaches their guts. Native animals that might go in for a bite generally chew their food more carefully, so they can detect and spit out the pellet, notes a government report.

There are concerns, of course, over whether these sausages are humane. A paper published in 1996 — feral cats have been a problem for a long time — attempted to elucidate how painful it is for an animal to die from 1080, noting that it kills carnivores via the central nervous system, but death does not seem to be linked to fear or pain. PETA Australia, the Brigitte Bardot Foundation, and many other animal rights groups nevertheless argue that culling in general is inhumane and that sterilization is a more ethical choice.

The ethical debate surrounding the cull is much greater than the efficacy of poisonous sausage. Australia’s loss of native life to feral cats is a study in conservation and invasion. Already, 130 native species have gone extinct since European settlers arrived on the island along with their imported goods, feline or otherwise. What the sausages represent is a warning about the lengths we may have to go to when millennia-old ecosystems are suddenly disrupted by a powerful, intrusive force.

More like this
Science
6.22.2022 11:00 AM
Watch: These bats can memorize your phone ringtone, and it might help them hunt
By Jennifer Walter
Science
6.22.2022 8:26 PM
Yes, there are mites living on your face — and they can poop, a new study finds
By Allison Parshall
Science
7.2.2022 12:00 PM
Why is my cat scratching furniture? The answer might surprise you
By Tara Yarlagadda
Related Tags
Share: