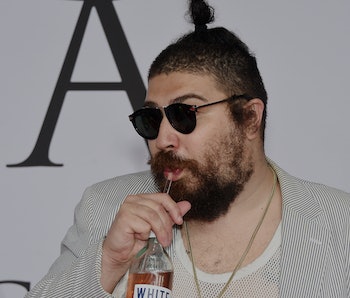 After a point, people cease being people. In 2015, celebrity morphs a person from a flesh-and-blood piece of humanity into content. Rarely has that been made clearer than in New York magazine’s recent interview with the Fat Jew, a beleaguered brand who made clear he’s tired of being held to the standards of actual people.

The brand in the past week saw multiple accusations of plagiarism of tweets and jokes, which as the interview covered, isn’t the first time he has been accused of ripping off actual writers. In reply, Fat Jew the Brand dodged questions, shirked responsibility for not citing his sources, pulled the “I’m a curator” card, and used his interns as human shields. Asked whether he’s a comedian — i.e., a person expected to abide by basic ethics — Fat Jew the Brand replied: “No, I don’t, honestly. I think of myself as a commentator, as an entertainer.”

Other actual comedians did not buy this line of weasel-reasoning:

There it was. Whether he’s a comedian, entertainer, or whatever doesn’t really matter. When he’s getting four-figure paychecks for tossing off sponsored posts to his 5 million Instagram followers, he’s officially in brand territory. Brands don’t care about providing proper accreditation. They don’t care about acknowledging sources. They just care about self-promotion, audience acquisition, modern carnival-barker bullshit. Which is exactly what Fat Jew has done with this new wave of attention in his direction. When life gives a brand lemons, the brand markets it as organic to sell it for twice the price. Fat Jew the Brand has spoken, and if you care about curating the things in your own life, you’re best off ignoring him into the distant future.