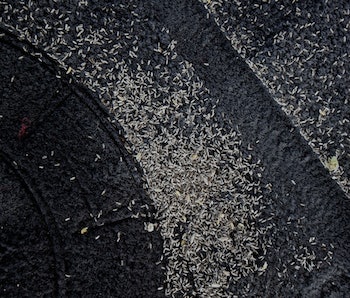 Burning Man, the week-long annual event that runs at the end of every summer, is ostensibly a celebration of radical individualism and self-reliance, where a community of people living on the fringe could come together and take part in the incredible experience of watching a giant wooden effigy light up the night and burn down to ashes.

And now, in its 29th year, Burning Man, now the favored summer vacation site for Silicon Valley, is covered in bugs.

The official Burning Man blog is reporting that many people are stumbling across huge swarms of bugs infesting parts of the pop-up city, located this year in Blackrock City, Nevada. The pestilence all feels a bit biblical in nature.

Really though, no one should be very surprised. The exact reason bugs are showing up in waves isn’t known, but pests are one of those things that follow humans wherever they go. Almost 66,000 people attended last year — almost the same population as Santa Fe.

It’s disgusting, although that hasn’t stopped some people for actually interpreting it as some kind of biblical punishment. Mic Wright at The Next Web argues the insect infestation is just rewards for the way “dominant Silicon Valley philosophy” treats “regulators and normal people like bugs.”

Maybe that’s true. More worrisome to me, however, is the fact that when pests congregate in a makeshift community, and that community breaks up to go their separate ways, they often take the pests with them. That means you’re likely going to see a lot of people opening up their bags when they get back home and finding some unexpected stowaways who could potentially carry infectious diseases and introduce a new epidemic in a community. Alarmist, sure, but not totally out of the picture.

Good luck to all the burners. You may want to set fire to that effigy earlier than scheduled.