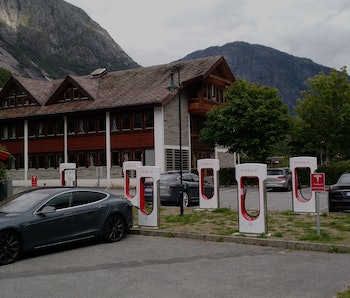 Norway’s new car market is now comprised of more electric cars than non-electric, a Monday report revealed. The northern European country of around five million has laid the foundations for ideal electric vehicle ownership, but the switchover has been largely driven by new Tesla Model 3 purchases.

The latest results show a staggering rate of switchover. The figures show that 58.5 percent of cars registered in March were battery electric vehicles, the first time in a month that the figure reached over 50 percent. The market share for the first quarter of 2019 also set a new record of 48.4 percent.

“Norway has every reason to be proud of breaking more BEV records,” Christina Bu, secretary general of the Norwegian EV Association, told Elbil. “The BEV policy is working so well that the larger part of consumers opt for a BEV when buying a new car.

The switchover was partly driven by the Tesla Model 3, the company’s cheapest-ever electric vehicle. The car hit North American roads in July 2017, but it wasn’t until this February that the first Model 3s started reaching European roads. Around 30,000 excited Norwegians had placed over 400 million krone ($49 million) down as a Model 3 deposit as of October 2018.

In the month of March, the first full month the vehicle was available in Norway, 5,315 Model 3s were registered, beating a month-long record set by the Nissan Leaf last year. The record also far outstrips Tesla’s previous record in December 2017, when it saw 2,461 Model S and X vehicles registered for the road.

Norway is a key market for Tesla, as Musk claims it has the highest number of Teslas on the road per person. Owners speaking to Inverse praise the high levels of safety, but note that the semi-autonomous Autopilot system struggles in the snow.

Viktor Irle, market analyst with EV-Volumes, told Inverse in October 2018 that Norway’s success comes from the high rate of tax on cars, which grants electric vehicles an exemption. Electric vehicles also experience benefits like exemption from ferry tolls, which costs up to 400 krone ($46) per day.

The Norwegian EV Association has projected that electric cars will remain the majority of the market for the rest of the year. The government has mandated that only zero-emission cars will be sold after 2025, at which point the association projects Norway will have 1.2 million cars on its road.

As the market expands, it could help foster innovation — Oslo is planning to install 75-kilowatt wireless chargers for around 25 electric taxis this year, so drivers can top up their battery while waiting at the rank for passengers. Its creator describes it as the “holy grail” for user experience, and it could help other vehicles like trucks and buses to go electric.