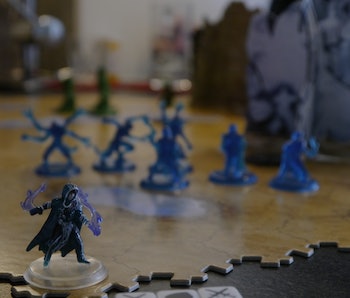 Magic the Gathering: Arena of the Planeswalkers, the latest offering from the gamesmiths at Wizards of the Coast, is a tabletop slugfest that takes place in the war-torn ruins of Shandalar. The dominant aesthetic is desolation and the battle goes down in an arena, where you face off against other planeswalkers across a vast expanse of flat sand, small mounds of sand, and large mounds of sand. Snap the board together like the six-piece puzzle it is — refreshingly for a war game, Planeswalkers has very little setup time — select your mage and summon your army: You’re off to duke it out with dice.

The first enemy you’ll face is not one of your friends but a bleak and somewhat bewildering rule book. The nouns that make up the game’s menagerie include figures, planeswalkers, sorceries, enchantments, aura enchantments, hidden enchantments, creatures, heroes, unique squads, common squads, armies, army cards. The rules want to herald great things to come, but references to hero figures and common squads — that do not exist in the box — should have been cut for an emphasis on how to, you know, play the game. It took a frankly embarrassing amount of time to determine that several creature figures comprise a squad or establish when a planeswalker’s special ability could be activated. In a game built of hexagons, there are a lot of corner cases: When all creatures in a squad die, for instance, are the auras that enchant its army card also destroyed? (We decided they do, playing by Magic’s card game rules.)

As you might expect, Planeswalkers borrows its characters and spells from Magic: the Gathering. Over its 20 years, Magic has accumulated heroes, villains, and rapscallions, but you’ll find only its fantastic five here: Jace, with mind control and tricks/illusions; Nissa, who taps into elves and forests; Gideon, strong on defense and flailing; Liliana a necromancer who just seems bonkers powerful in this game; and Chandra the fire wielder. It’s cool, but not that cool — partly because it feels like a ploy.

Wizards of the Coast has begun releasing Magic products like spores from an overexcited mushroom — there is a movie in the works, and you can now play a streamlined, Hearthstone-esque version of the card game on your iPhone — and this latest expulsion reinforces that these five planeswalkers are meant to be the shiny, mana-flushed faces of its multiverse.

But Planeswalkers’ true roots are not the mathematical card engine from where it sucks its flavor, but a lesser known, no-longer-in-print game called Heroscape. And because Wizards of the Coast owns Heroscape, they simply harvested Heroscape’s roots and planted them in Magic’s soil. Luckily, the game mechanics, as any Heroscape fan could tell you — and there are a few diehard ones still around today — are sleek. This is a war game for people who don’t want to futz with rulers or lengths of string: If your elf archer could plausibly see enemy zombies, the undead have reason for concern. Like Magic, this is a game best played as a duel. With three novice players, the battles had all the grace of a bare-knuckle brawl. Headlong rushes at whoever drew first blood — a thoroughly enjoyable but anti-tactical playing style — effectively and inevitably make an unmolested third player king.

Arena of the Planeswalkers is ripe with potential — and you get plenty of molded plastic for your $29.99 — but it’s a game plucked a bit too early. “Expect more in 2016!” the rulebook exclaims. It’s a shame, then, we don’t get more now.