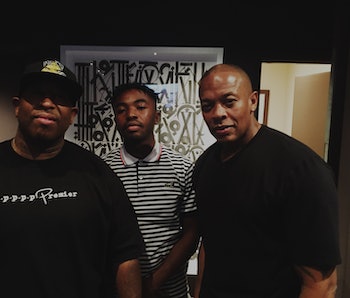 A year ago Morris “King Mez” Ricks II moved from Raleigh, North Carolina to Los Angeles. He left the place where he made his name a budding local talent to pursue his big dreams. He joked with his buddies that he was going to meet Dr. Dre and not long after arriving he found himself doing exactly that. Not only working with Dre, but being one of the primary writers on what would become Compton: A Soundtrack by Dr. Dre. We chatted with him earlier this week, as he was already deep into work on his next project, not ready to let this single album define his young career.

Inverse: How’d you get reached out to by Dr. Dre?

King Mez: It was [Big] Pooh from Little Brother that reached out to the A&R at Aftermath.

I: When you first sort of got there did you have any idea what kind of projects you’d be working on?

KM: Nothing specific, Dre didn’t even know what we would be doing. I think he was very inspired, which is what everybody kept telling me. ‘He’s very inspired, you bring a good energy, your talent it’s very particular to what it is that he’s looking for.’ He was really inspired by myself and Justus, we were the first two.

I: When you first got reached out to how’d it feel?

KM: I was excited but I knew that nothing comes easy and it was going to take me showing what I was made for me to stay, stay around and to work, or for something to materialize. Everybody felt it was fictitious for me to be there, or that the album is never coming out, to be one of the ones, and one of the main reasons for it come out was definitely meaningful to me. But yeah I wasn’t super hyped just yet.

I: When did it hit you that you’re doing this thing and it was just a thing you were working on, but that it was going to be coming out?

KM: There were instances where we made records at the beginning, where I saw [Dre’s] eyes light up and the room light up. Engineers and people who’ve been around thanked me and his wife thanked me ‘thank you for being around and so being invested and talented’. I could tell that things were different. I wasn’t around for the era when things were dark or stagnant, so it’s hard for me to juxtapose, but I could definitely tell there was no way he was acting like this and not putting music out.

I: Did you ever speak to Dre or engineers or producers working there about stuff that had happened previously?

KM: They talked about how much slower things were before. He’d come into the studio a couple times a month and people would write or make beats and music, and he’d hear it and be semi-excited and maybe go back home, but he wouldn’t record. I remember one particular night where he recorded three songs in a night and everyone was running around in the studio—all the people that were there before use, because they never saw him do that before. Yeah they were excited and happy, cause things were different and changing.

I: How did you get started rapping?

KM: I’ve been rapping since I was 9. What’s interesting is that I was 9 when Chronic…2001 came out and that was the first CD I bought with my own money, and it’s funny how those things come back around.

I: The last full length project you put, Long Live the King, how’d you feel about that and the reception it got?

KM: People liked it a lot. It was written about on a lot of websites and a lot of respected people, it was interesting but I put it out with no financial backing, no record label, no publicist. Just me and my friends emailing people. I haven’t a job since I was 18, off the strength of music. Finding a way, finagling a way. For it to work out like that without any backing, I knew if someone put a spotlight on me I was going to shine, and I’m getting the opportunity now.

I: Were you already in contact with Dre once Long Live The King was out, or was it after?

KM: It was way after. Long Live The King was out and “Can’t Let Go” was on MTV I think around the time when he hit me up. I don’t think he ever heard — well maybe he has, to be honest with you, cause he seems the kind of guy that researches, but not to my knowledge.

I: I remember reading the cover story for you in the Indy Week and don’t remember it mentioning that you were working with Dr. Dre. And I didn’t know if the cover story came out and if you were still in North Carolina and all of a sudden Dre came to you, or if you had already known and hadn’t made the announcement.

KM: The Indy cover was a very funny thing as far as timing goes. It was not long after that that I got the phone call. The Indy cover actually was like more about this kid from Raleigh who attained local success and a little internet success, who thought he’d move to LA and try and figure it out, that type of shit. That’s how I looked at it, and then I moved to LA and figured it out.

I: Reading the cover and seeing your Instagram, [I] assumed that all of that was planned out for months.

KM: Hell nah. I had no idea what the fuck was going to happen when I came to LA. I was hoping it was going to work out one way or another. I was telling my friends how I was going to meet Dre and I had no reason to say that. Of course I didn’t tell the Indy that cause I would’ve sounded crazy if I did. I thought I had an in, it wasn’t even Pooh who I thought originally was going to get me in, it was Dawaun Parker, a producer who did “Black Boy Style”. I thought me with him was going to get me to Dre, but I ended up never working with him. It was the Big Pooh thing that got me in there.

I: Since the album’s come out have you been reached out to by anyone that’s surprised you?

KM: Countless people that would’ve never expected to reach out to me. I literally got a second phone two days ago, because this phone. I feel like I got 300 texts messages on the day they released the tracklist alone. Then the album came out and my phone went super crazy.

I: The album is out now, what is your next move?

KM: I’m already working on my next project, me and Dre were in the studio last night. It’s gonna be great. We’re definitely going on tour soon, overseas and the United States on a really big tour. I’m going to tour a lot and release my music real soon. So like I tell everybody all the time, I’m just getting started. I didn’t come here to be a writer in LA. I came out here to etch my name in this shit, in this hip-hop shit.

I: You wrote a lot on the album. Was there a particular track that you’re really happy about?

“Talk About It.” The energy that it brings. If you haven’t heard that in a car or in a club yet that’s what you gotta hear out-loud to hear the energy from it. And we haven’t even performed it yet. Yeah for whatever reason there’s some energy attached to that one. That wasn’t even the intro originally, I told him to change the intro and he took my advice, but I didn’t tell him to choose it. I just came in the studio one day and that was the intro.

I: At least as you’re saying right now, it seems that Dre was really open to the ideas that people were throwing at him?

KM: He’s the type of guy that once you’re in his circle he trusts your opinion [and] he’ll take it serious. Literally to the point where I changed the tracklist my damn self numerous times. I helped take songs off the album, ‘I don’t think we should use that’, me and him might go back and forth and be like ‘I don’t know, maybe you’re right” and he’d take it off like he was right about that. Or I want something off the album and he keeps it instead. That ended up happening with any of those songs in particular, but it was definitely interesting how he took my opinion.

I: You yourself are a producer, how’d you feel working with all of these different producers and working with him?

KM: Dre is easily by far the most talented person I’ve worked with in my entire life. Easily. The most talented, the most precise, the most particular, and easily the hardest working artist I’ve met in my life. And the richest. Which is interesting, which often it isn’t the richest person that works the hardest, but he’s the richest person I’ve ever met in the music business. He inspired me to work harder and inspired me to push those around me to work harder and to be great and to be better, because of what rubbed off on me from him. He sees himself in me and I don’t take that for granted and I’ve learned so much from him about life.

I: Were there any tracks that you worked on or other people worked on that you wished made it onto the album but ended up not making it for some reason?

KM: Yeah a couple, there is a song with me and BJ the Chicago Kid that I wrote and Dre helped, and that song I really wanted to make it. There were so many songs that were particularly good. There was a song with me, Dre, and Jay-Z that didn’t make the album and that song might be on my EP. There are a lot of songs that didn’t make that were great.

I: This album came out, but Dre said that Detox will never come out. What do you make of that?

KM: Honestly, that is kind of a mystery to me too, because I know some amazing songs on Detox, I’ve heard some things, some brilliant stuff and why some made it or some didn’t and why the album didn’t make it. I don’t know. I guess I was so focused on whatever we were doing that I didn’t think about it too much. Even in his failures there is still quite a bit of genius. And I don’t even know if you call that a failure, he just made a choice to not put it up.