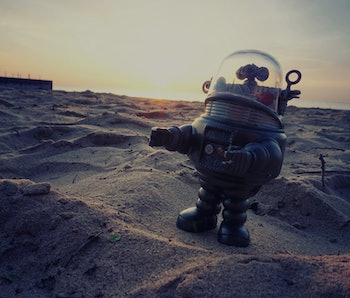 Mass extinctions give rise to accelerated rates of evolution, at least over a long enough term, a new simulation published in the journal PLOS One demonstrates. This theory was first floated in evolutionary biology back in the ‘90s, but, at the time, there was no way to prove anything without a lot of ammo. Now there is.

Computer scientists at the University of Texas at Austin — Risto Miikkulainen and Joel Lehman — created simulations of walking robots programmed to walk as far as they could before falling over.

The artificial neural networks that controlled the legs could evolve over generations. Every so often, the researchers introduced extinction events that wiped out 90 percent of the population. Increased numbers of extinction events (from zero for control, up to an extinction every 1,000 generations), meant the robots had “evolvability,” measured as phenotypic variation.

Such an evolution/extinction method could be used to figure out the best way to have walking robots on Mars or through minefields, the scientists say.

On an even broader scale, this theory bodes well for the future of life. Climate change is killing species to the point we may be in a sixth extinction — which is undeniably bad news for us and many species living now — but not all life is going to kick the bucket. And squint long enough and hard enough (like, very long) at this planet of weeds, and chances are it will turn into a garden again.

There are a few ideas why: fewer competitors or predators after stressful periods, or a persistence of certain genes that would have gotten lost in a bigger crowd. Sure, the squid-gibbons from the Discovery Channel’s wonderful 2002 fever dream The Future is Wild might not be around, but what’s even less likely is that a couple million years from now the earth is completely barren.