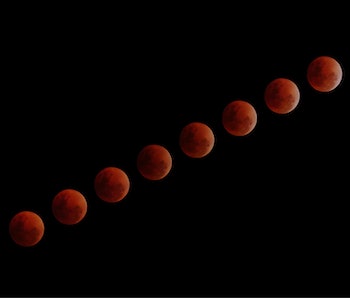 All of that is to say this: It is pretty rare that they are happening together. All the more reason to check it out this weekend.

Where Can I See It?

You’re in luck if you live anywhere in North or South America. In Europe, you’ll be able to catch it in full from Greenland, Iceland, Ireland, Great Britain, Norway, Sweden, Portugal, and the coasts of France and Spain; anywhere else in Europe will get a partial viewing. The western coast of Africa will catch a partial view, too.

Anyone who lives in the darkly shaded area in the NASA map below won’t get to see it live, but no matter where you are, you can watch it live-streamed from the Griffith Observatory in Los Angeles when the time comes.

What Time Does This Thing Start?

Set your alarms for 10:34 p.m. Eastern on Sunday, when Earth’s shadow will just begin to creep over the moon during the eclipse’s partial phase. As the shadow grows, the moon will gradually darken and turn blood red.

A lunar eclipse happens when the Earth casts a shadow on the moon. The Earth doesn’t throw shade (literal or figuratively) over the entirety of the moon. Some sunlight actually gets around the edges and hits the moon, causing it to glow visibly. This weekend, you’ll notice the moon blushing. That’s because the light reaching the moon is going through our atmosphere, which only lets long-wavelength light pass. This is compounded by excessive amounts of dust and particles in the air, so you’ll see a more extreme version of the phenomenon if you live in a smoggy or polluted area (assuming you can see anything at all).

How Long Does It Last?

In a little over an hour, at 11:41 pm Eastern on Sunday, the total lunar eclipse reaches totality, the moment the moon is completely blotted out.

It really is! Rice University astrophysicist Patrick Hartigan, Ph.D., told the AP, “This one is particularly good. It not only is a supermoon and it’s a total eclipse, but the total eclipse also lasts pretty long. It’s about an hour.”

Will Weather Permit It?

If you live in the United States, you might be better off tuning into the Griffith Observatory’s live stream. A big storm’s coming for the northeast and Atlantic coast, according to Accuweather, and clouds are expected to obscure most of the west.