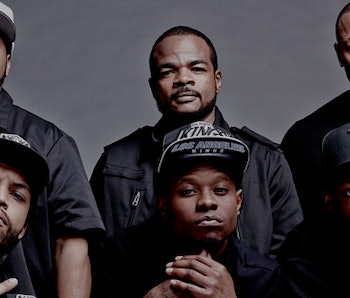 Straight Outta Compton hits theaters on Friday, after oh-so-much anticipation, so many memes, and a new, sprawling Dre album to build excitement. Pregame for the biggest bio-flick of the year by browsing this playlist of ten crucial NWA artifacts, all easily accessible through YouTube.

“I’m Dr. Dre, gorgeous hunk of a man” — this is the unlikely beginning of one of Dr. Dre’s earliest recorded verses. In the mid-80s, “The Doctor” spent a couple of years DJing in a hip-hop-friendly L.A. club, eventually demoing tracks with aspiring rapper and future NWAer Yella. This tribute to Dre’s powers of “mixology” was the first the two wrote together. After they joined the ranks of electro-hip-hop, keytar-sporting group World Class Wreckin Cru in 1984, a remix of the song was included on their debut album. Eventually, Dre drifted away from the WCWC to work with an old friend and former drug dealer, Eazy-E, who was mounting Ruthless Records, and gave up the sequined, glam-ified looks and sensual rhymes. As Yella summarized later, “We were appealing to the women back then.”

Recorded in 1986, this is one of Ice Cube’s earliest records — the sole single from his pre-NWA group CIA. It was produced by Dre after he conscripted Cube to help write for the Wrecking Cru and perform with him during DJ sets. It’s a hard-as-nails, Schooly D-styled boom-bapper; Cube delivers his verses in near-screams. It holds up surprisingly well.

This still-iconic song was released in a few different versions — first as a single with the NWA track “Dopeman,” on NWA’s first album/compilation N.W.A. and the Posse, and on Eazy’s first solo album Eazy-Duz-It in 1988. The song was Eazy’s first real pass at being a MC. Penned by Ice Cube, it passed on by (ironically) a New York group called HBO before being handed over to Eazy, whose sneering tenor was a perfect fit for the hard-nosed narratives and taunts. This was the first NWA-related regional hit, and delivered by a guy who had hardly rapped before.

With MC Ren — a skilled lyricist and former Crip affiliate of Eazy’s — joining the group in late ‘87, the classic NWA lineup was complete. The first single from the titular album couldn’t have been an apter statement of purpose. This is, obviously, the group’s most iconic song and video — though “Fuck tha Police” ended up being the most controversial — and their first major, national hit. The video has a hyper-realist bent (see the ominous opening PSA) which enhances the music’s visceral effect.

Thanks to the dominant sample of Charles Wright & the Watts 103 Street Rhythm Band’s titular 1971 single, “Express Yourself” is one of Straight Outta Compton’s sunnier, more overtly poppy moments. Lyrically, though, it’s largely a condemnation of censorship and hypocrisy. The song is a rare spotlight for Dre’s rapping, though Cube wrote it (“Blame it on Ice Cube, ‘cuz he said he gets funky, when you add a subject and a predicate”). The fast-paced video mostly highlights a block party, but also features Dre, wide-brimmed-hatted, on a horse in plantation fields, and concludes, incongruously, with him getting sent to the electric chair. It’s the grim reality setting in: To NWA — at that time, the target of much ire — the ideal of being able to freely speak their mind seemed an unattainable, utopian vision.

In this 1990 Arsenio interview, NWA (now sans Cube) gives a quick interview before performing their new single “100 Miles and Runnin’” (from their post-Straight Outta Compton album of the same name). Eazy wears a Jason Voorhees-esque hockey mask and whispers his response to Arsenio’s question to Ren (“He keeps chanting ‘Compton,’ I don’t know why.”) Ren speaks eloquently about the message of the group’s music and being targeted by law enforcement because of their lyrics. “So you’re not not all police are bad?” asks Arsenio. “Nah. But 90% of ‘em are,” Ren fires back defiantly.

The skit-riddled video for Dre’s second single from The Chronic featured a comic, corporate-stooge Eazy look-alike named “Sleazy-E.” The song was the most overt inter-NWA diss to date, next to Ice Cube’s “No Vaseline.” It followed on the heels of Dre and Snoop’s tremendous success with “Nuthin but a ‘G’ Thang.”

This was Eazy’s biggest post-NWA single, and his most potent Dre diss, though much of his It’s On (Dr. Dre) 187um Killa album (clearly) was devoted to defaming his former bandmate. The song and video mock Dre’s beginnings with the Wrecking Cru, and his transition “from wearing lipstick to smoking on chronic at picnics.” Eazy calls Dre’s limited street bonafides into question — and at the moment Dre and Snoop Doggy Dogg were taking over the charts with their new souped-up, definitively “gangsta” sound. All this makes “Real Muthaphuckkin’ G’s” one of the all-time-classic “studio gangster”-ragging diss tracks in hip-hop history.

More like this
Science
4 hours ago
Ancient chicken bones and snail shells date the destruction of a Greek city
By Jennifer Walter
Science
8.14.2022 9:00 PM
Ancient lore reveals how warriors manipulated their enemy’s senses in battle
By Adrienne Mayor and The Conversation
Gaming
8.14.2022 3:00 PM
You need to play the most exhilarating free game on Nintendo Switch Online ASAP
By David Grossman
Related Tags
Share: